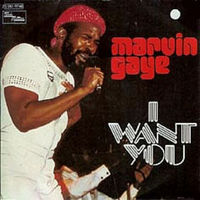 I'm kinda geeked right now because Marvin's "I Want You" is my favorite track by him. All you "Sexual Healing" and "Let's Get it On" cheerleaders need to fall back!

That said, who could make the unmentionables drop quicker than this brother? The track was written by Leon Ware and was originally intended to be released by him, but Berry Gordy had other plans. Boiling the track down, one can't help but notice its simplicity. The lyrics themselves don't explicitly point to any sexual yearning. But, Gaye's delivery, silken and heartfelt, infuse the track with the kind of longing that suggests he's restraining himself as much as he possibly can, until the inevitable burst. It's sexual because it's Marvin and it totally works.

The track would eventually see a ballsy remake by none other than Madonna, while also being channeled in Musiq Soulchild's "Onenight." But only Marvin Gaye, at once sensitive, political, then slightly brazen, could take an otherwise lyrically-anemic composition and turn it into a tour de force. Best. Marvin. Song. Ever.

Marvin Gaye: "I Want You"