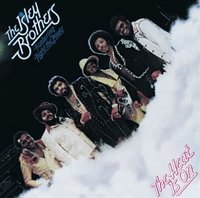 Is it any wonder that the end of the first half of the SoulBounce Top 100 Soul/R&B Songs and the second appearance of The Isley Brothers on our list is with their classic cut "For the Love of You Pts. 1 & 2"? After all, as the last days of Spring give way to the first days of Summer (not that I can tell which is which as hot as it is in DC right now) this easy, breezy song is the embodiment of a refreshing light rain and the sunshine's warmth. From the opening notes and Ronald's "Well, well, well" ad-lib sung in his signature tone, "For the Love of You Pts. 1 & 2" is pure musical bliss. When the song was released in 1975 on their multi-platinum album, The Heat Is On, it barely cracked the Top 10 on the R&B singles chart and registered in the Top 25 of the Pop singles chart. But those surprisingly low chart appearances aside, this seamless two-part song about living your life for the love of another is but one of this band's greatest hits and five minutes of heaven for our ears. Whitney Houston's smooth jazz take on the song was an excellent cover, but the definitive version is still the original. There's no denying that this is a song that just makes you want to grab your boo by the hand and wrap them up in your arms while you two slow drag the night away.