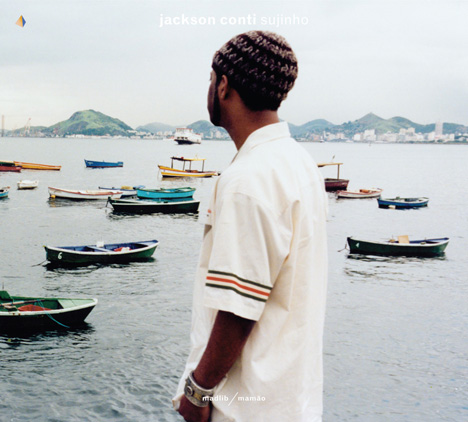 As much as I have written on sometimes elusive Madlib (pictured above) on this website, it stands to reason that I think the man is a musical genius. For others, you only "get" Madlib and his several incarnations, or you don't. That being said, Madlib a/k/a Otis Jackson, Jr. has teamed up with Ivan 'Mamão' Conti, drummer for Brazilian electric-funk-jazz fusion Azymuth to form like Voltron "Jackson Conti" (get it?) and released an album Sujinho. An excellent example of their collaborate effort id "Papaia" below which sounds like a reworked version of Player's "Baby Come Back" but to a samba beat. Excitement isn't even the word to describe this combination of musical talent, and like with most anything I'm feeling that's musically-related, you get to reap the benefits, too. Though this won't fix the Brasil lust I'm currently feeling that was fueled by a late-night viewing of Black Orpheus, this will do quite nicely.

Check out Madlib and Mamão in action after the bounce.
Jackson Conti [Official][MySpace][iTunes]