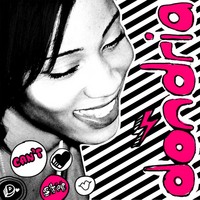 After endearing himself to absolutely no one with his recent antics and running off at the mouth, Jermaine Dupri somehow found time to actually do a little work and sign a new artist to his label. That's if you call surfing YouTube work. Yes, folks, the 'Tube has replaced artist demos, showcases and, hell, even MySpace as the place to find new talent. The latest member of the So So Def family is none other than 21-year-old Texas singer Dondria (aka Phatfffat), whose first single "Can't Stop" is burning up the internet in much the same way as her wildly popular YouTube channel filled with her series of webcammed covers of popular songs.

Can Dondria sing? Fa sho. "Can't Stop" is cute, catchy and showcases her vocals quite nicely over a retro beat du jour. I just hope that JD doesn't turn this '60s-inspired sound into the new Snap music. He's been known to run a trend into the ground.
For more on Dondria, check out a YouTube video (duh!) of her, JD and Johnta Austin (whose album will be released on Neverary 32nd) talking about the project after the bounce. Dondria's debut disc, Dondria vs. Phatfffat, is scheduled to drop on July 29th.