Phonte Proving To Be Quite The Comedian 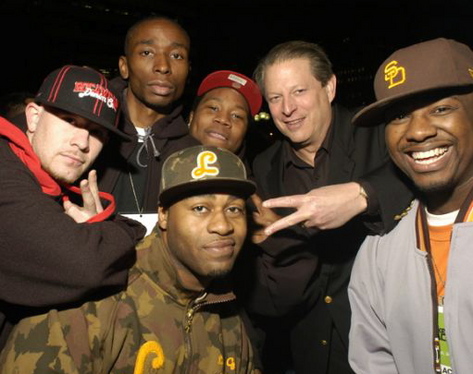 If any of you are unaware of "Gordon Gartrell Radio" hosted by Phonte from Little Brother (pictured at far right with 9th Wonder and Al Gore...huh?) , do yourself a favor and subscribe to it here. We at SBHQ were hooked from the moment we heard the show was named after the designer (actually Cosby Show producer) of the shirt that young Theo Huxtable just had to have, and have been especially hooked after hearing Phonte make commentary on such varied topics as Barack Obama to proper three-way sex etiquette. Over on his MySpace blog, Phonte has posted his take on what an IM convo between Bill Clinton (a/k/a/ slickwillie 46) and Al Gore (a/k/a/ inconvenient truthfulness). It's pure comedy, and should come as no surprise since Phonte was also one of the folks behind this take on gangsta lyrics redone to a soulful beat. Be sure to check out his MySpace page for more comedic foolishness, including his take on what would have happened if R Kelly had peed on a dog. Yes, he did go there.