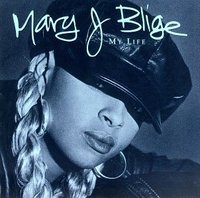 A long time ago, before Mary J. Blige's My Life passed into becoming a classic--her defining moment, the R&B album by which we gauge all succeeding R&B albums, the album that we play on repeat to get over that trifling n***a that knocked us up and broke our hearts--people considered it derivative. This was not without warrant. Sampling had always been a large part of Hip Hop, but carrying that over into R&B with little variation rubbed some people the wrong way. A lot of classic artists were recalled to fortify the album--Rick James, Isaac Hayes, Barry White, Rose Royce, Curtis Mayfield and Roy Ayers. But it wasn't just that they were sampled; it was that the most obvious songs from their catalogues were used.

I've always been an apologist for My Life. I never wanted to believe that so much sampling and interpolation was due to lazy, unimaginative producers, especially since not all of the album's tracks fell into this category. Instead, I would see it as Mary revisiting some defining moments in her life, and using those songs as a way to bookmark them, just as we eventually would with her music. This, of course, would eventually get out of control as many tried to duplicate the magic and the formula for other artists and even Mary herself. Love & Life saw Mary and Sean Combs, sans Faith Evans and Chucky Thompson (first mistake) attempting to recall the magic of her seminal sophomore release with no heed to how "Hip Hop Soul" had changed.

Even still, the title track which used Ayers' "Everybody Loves the Sunshine" was like sweet blasphemy. It was never officially released as a single, but you better believe radio stations played it like it was, often at the top of quiet storm sets. Very few songs since have captured Mary's character. She was more outspoken then, and there were no cut cards when she needed to get something off her chest. The lyrics said as much, along with keeping the faith. So put God first and place mere mortals somewhere below and you'll be able to get through life without wanting to bust Veronica Webb in the head. Or something.