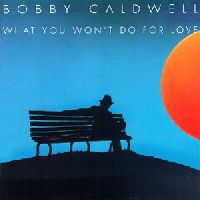 Stop me if you've heard this one before: An artist completes an album, listens to it, and decides that something's missing. So before submitting it to the record company, they go into the studio, mess around with some tracks and come up with a gem that eventually carries the project. Well, that's a variation of what happened to Bobby Caldwell, who had completed the recording of his 1978 self-titled solo debut for TK Records, only to have the record label tell him that they didn't necessarily hear a "hit." Caldwell went back to the studio with just some beats, quickly wrote down some lyrics, and today's entry in the countdown--"What You Won't Do for Love"--was born.

The single catapulted the debut to multi-platinum success, reaching the top ten on both the Billboard Pop (#9) and R&B (#6) charts. Caldwell, thanks to his record company portraying him in only silhouette on album covers and posters, remained a mystery to all those that fell in love with his silky-smooth vocals. In fact, it wasn't until he went out to promote the single that audiences discovered that he was white. The song has been remade many times, with my personal favorite being the Phyllis Hyman version from her Living All Alone album, with Tupac's use of the beat for his "Do for Love" track coming a close second. Enjoy.

Bobby Caldwell: "What You Won't Do for Love"