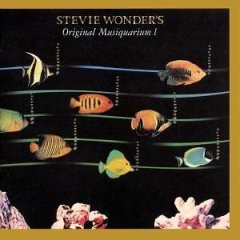 Picture it: Queens, 1982. An eighth grader named Charles takes the stage at an I.S. 59 assembly and proceeds to blow a young Harlem away with his rendition of the then-new Stevie Wonder song, "Ribbon in the Sky." Two things stayed with me from his performance: the way he, an EIGHTH GRADER(!), flawlessly played the piano and sang at the same time, and how he sounded just like Stevie. I think that's why I still love this song so much to this day. Well, that and the fact that it's one of the most beautifully constructed love songs ever. Stevie's voice, and those lyrics, just ooze passion. A sample: "If allowed, may I touch your hand/And if pleased, may I once again" and "We can't lose with God on our side/We'll find strength in each tear we cry." Deep. Of course, the song was a major hit, becoming a staple at wedding receptions the world over. It originally appeared on Wonder's Original Musiquarium compilation disc, charting at #54 on the pop charts and #10 on the R&B list. The group Intro put their foot in their 1994 version of the song, with it becoming their second best-selling single. Even with all the duplication, though, this is Stevie's song, hands down. So as I continue down memory lane, take a listen to Mr. Wonderful and touch the hand of the one you love.

Stevie Wonder: "Ribbon in the Sky"