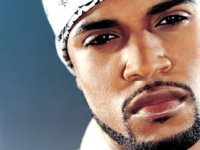 Memo to all male R&B group members attempting to go solo: If you're going to do it, you have to BRING IT! Whew. Glad I got that off my chest. Now we can calmly discuss the new track from R.L. of the R&B group Next that's recently leaked on the net. It's called "Outta Here," and is one of a few songs that have been making the rounds over the past few months, allegedly in support of his second solo album, Important, which is due to drop sometime during the fourth quarter. The previous leaks--"I Love You" and "Dangerous"--were underwhelming at best, and "Outta Here," while not as bad, still isn't the stuff of which lead singles are made. It gave me the same feeling that Musiq's latest offering did, which is more of an indictment than anything else. The singer, who is signed to Mathew Knowles' Music World Entertainment label, revealed last year while on an Atlanta radio show that Next will also be releasing new material soon. Which is fine, as long as they realize that the memo above applies to them as well.

TAGS:  audio, mathew knowles, next, rl
Previous: John Legend Performs ‘Out There’ at DNC Next: ‘Good Morning’ To You, Too, Kanye West