Is the Motown Re-Tread Ingenious? Or a Crutch? 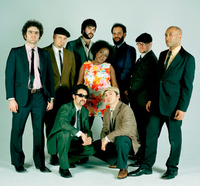 We've been absolutely ga-ga over the singers we've highlighted on this site that "go way back, back into time" to channel what can only be defined as a decidedly "Motown Sound." To wit, anything that reminds us of the imprint's golden era is automatically welcomed with open arms, mainly because it offers a respite from some of the paint-by-the-numbers, auto-tune foolishness that has completely weighed down the commercial side of Black music. But are the artists that use this sound as guilty of trend-chasing as their mainstream counterparts?

We're hesitant to credit Amy Winehouse with anything other than being a tragic mess, but we'll use Back to Black as an example, for the sake of conversation. While her first release Frank employed
a sound that was at once contemporary R&B inspired by classic Blues
with a sprinkling of Hip Hop, her second album smacked you in the face
with Motown influences. "Tears Dry On Their Own" is nearly a direct
clone of "Ain't No Mountain High Enough" and the track for "Rehab"
could've easily been a leftover from The Temptations or The Supremes.
This would be the single that made her a household name on our side of
the pond and would arguably influence succeeding artists to take the
same approach.

Disagree? Check out the recent offerings from Solange, who's so unique and innovative and unlike her sister that it seemed her only option was to channel The Supremes. Raphael Saadiq (who
can do no wrong in my book) is also going there, but it could be argued
that this was the path he was headed toward, starting with Tony! Toni! Toné!'s House of Music. The Platinum Pied Pipers' "On A Cloud" featuring Karma uses a backbeat similar to "Rehab." Other acts that may be guilty of this include Little Jackie, Duffy and Alice Russell when paired with the Quantic Soul Orchestra. We're hesitant to include Sharon Jones & The Dap-Kings,
who are certainly part of this revival but every album in their catalog
since 2002 uses this approach. (Let's not forget that when Lauryn Hill did "Doo Wop [That Thing]" it was 1998. And here we are 10 years later.)

So let us know what you think. We're definitely enjoying the old school
sounds, but if this many artists are doing it at the same time, how can we credit them for going against the grain?

(Special thanks to Cornfed for the examples, which run a lot deeper than what I used here.)