John Legend Performs ‘Out There’ at DNC 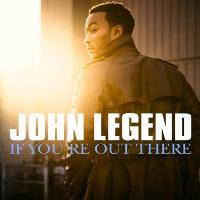 Let me just say this: If the rest of the week is anything like the first night of the Democratic National Convention in Denver, it might be too much for me to take. The convention, already a spectacle with the many celebrities descending upon the Mile High city, got off to an emotional start--from the surprising appearance by the ailing Senator Edward Kennedy to the resonating speech delivered by Michelle Obama. Kicking off the evening's festivities, however, was John Legend, who debuted a song from his upcoming Evolver album entitled "If You're Out There," and if the crowd's reaction was any indication, the performance was pitch perfect. The track, which became available on iTunes last night, is an extension of Senator Barack Obama's ongoing message of change, even urging everyone listening to step up and take on the challenge of being "the change that we want to see."

Legend, who was backed by the Agape International Choir, has been on board with Obama since day one, and clearly made this song with the presumptive nominee in mind. You have to wonder if it's too late to have this track placed into consideration for the campaign's theme song. Either way, it set the tone for what will be an historic week. If you're out there, take a look at the clip and let us know what you think.