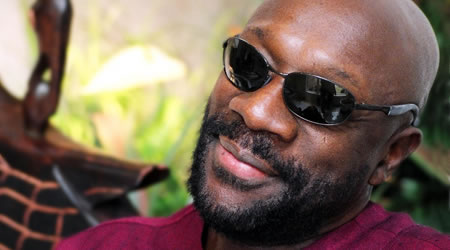 It's happening far too often now. We're losing extraordinary people who have contributed extraordinarily to our lives at too fast a pace. This past weekend, we lost a multi-faceted talent in Isaac Hayes, and more than with any of the others we've lost recently--and there have been a lot--he was a great loss because of what he brought to the table. What he meant to Black America and, in turn, the world. With his death on Sunday, we not only lost a great soul musician... we lost a bit more of our soul, the very thing we can't afford to lose. We lost a huge portion of it when James Brown left us less than two years ago, a huge reason why we never can say a proper goodbye to Hayes, who was a soul man to the core.

Live and direct from Memphis, Tennessee, home of Stax Records and gutt-bucket soul, Hayes placed his fingerprints all over that label, writing chart-topping hits for other artists before following his inner voice, before doing what he always wanted to do, which was, as he told Rolling Stone back in 1970, to "sing pop music, easy listening." If Brown was considered the hardest working man in show business because of the sweat-inducing, high-octane infectious dance moves he brought to each and every show, the man we came to know as Black Moses was just the opposite. Deliberate. Cool. An icon that oozed sex appeal.

In fact, his stage shows were famous for everything except his
dance moves. It was the sunglasses, the bald head, the chains around
his neck. He was a symbol of empowerment just like Brown was--a black
man who stood for something, who said something. A voice of a generation that demanded
to be heard. And then there was his music. The way he recast the pop
hits of others (most notably Burt Bacharach) was
mesmerizing, drenching each track with "hot buttered soul," including
strings and horns and lengthy arrangements. His take on Dionne Warwick's
"Walk On By" was otherworldy, with a bass line that stalked the track
and, combined with his voice, was almost hypnotic. His remake of "Never Can Say
Goodbye" was like the grown and sexy version of the teenage pop hit
by the Jacksons, dripping with the type of sensuality Michael and his
brothers could never muster.


Of course, he was most famous for the
fierce, groundbreaking soundtrack from the 1971 motion picture Shaft, with the "Theme from Shaft"
as its centerpiece, forcing an industry that up until that point took
blaxploitation for granted to take notice. That masterpiece enabled him
to become the first African American composer--the first soul man--to
win both an Oscar and a Grammy. His body of work, which included the hits "The Look of Love," "By the Time I Get to Phoenix" and "Do Your Thing," finally landed Hayes
into the Rock and Roll Hall of Fame in 2002, where he was inducted as a
performer. His humanitarian work was massive, with the singer giving
significant aid to the African nation of Ghana through the years. In
fact, in 1994 the nation crowned him a king. Which is more than
appropriate in that it makes him more than just a soul man. It makes
him the King of Soul. Today, we salute the father of 12 and the
grandfather of 14, for everything that he meant to the music we grew up
on, for every extraordinary thing he was able to accomplish during a
life that ended too soon.

There are a myriad of reasons why SoulBounce
was created. We pride ourselves on keeping soul music alive. It's
because of artists like Isaac Lee Hayes, Jr., and James Brown, and
Marvin Gaye, all pioneers when it came to the genre of soul, when it
came to being the soul voices of a generation that was in desperate
need of them, that we're able to keep the soul bouncing day after day.
Today, we salute a soul man, even as we lose a bit more of our own
souls. It's true. We never can say goodbye.