New Kids, New Edition Are At Your ‘Service’ 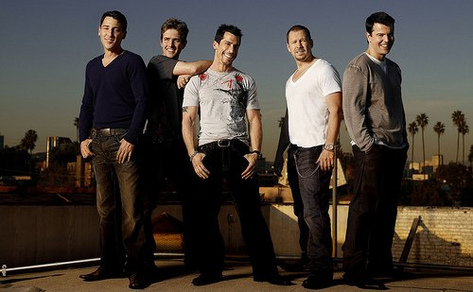 Last month we wrote about it and crossed our fingers that it wouldn't be a train wreck of epic proportions. So now that "Full Service," the much talked about collaboration between '80s boy bands New Kids on the Block and New Edition has surfaced, I guess the question is: is it any good? I've listened to it several times, and each time it's grown on me a bit more. So while it's not great, I think it's (wait for it...) serviceable. It's no secret we're not fans of auto-tune around these parts. However, I think it actually works on this track, giving it a little flavor that might've been missing otherwise. Besides, at this point, both groups probably felt that they needed to do something to help connect with today's generation. If auto-tune is the worst they'll do, I'll give them a pass. Personally, it was just good to hear the fellas singing anything again. Producer RedOne, who co-wrote "Service" with Kids member Donnie Wahlberg and New York disco singer Lady GaGa, called the track "universal" and "melodic," adding that upon hearing the track, "right away you start feeling good." He may be a bit biased. But you're not. Let us know what you think.