Robin Thicke is Ready for ‘Something Else,’ and So Are We 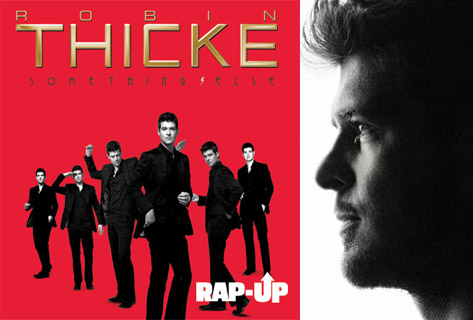 Robin Thicke gets a lot of attention here at SoulBounce, and with good reason. He is one of those artists helping to expand the common perception of who a soul musician is and what contemporary soul music should sound like. Recently Rap-Up.com posted a preview of the album art for his forthcoming album Something Else, and almost simultaneously a Billboard interview was posted in which Thicke's being labeled a "blue-eyed soul" singer is brought up again. We have to ask: How big of an issue is his whiteness, really?

SoulBounce already went Behind the Groove with Thicke, broaching this subject with him during Butta's interview. You should have a listen if you haven't
already. Ultimately, though, it's likely that other sites will pick up
the transcripted interview in which Thicke discusses not getting to be
on a VIBE magazine cover, and attempt to sensationalize it as an
example of prejudice against white practitioners of black music. The
interviewer encourages this, asking him about what it's like
"trying to break the color line from the other side" as though he's the
first and only white person to have accomplished recording an album of
and influenced by traditionally black music. Seriously.

Thicke responded with an anecdote about a recent experience with VIBE that only proves he likes
the magazine, that his interview with them had no promise of a cover,
and that he instigated the rejection, not them. He says he respects
their decision because he "lives in the same house as a black woman"
(referring to his wife, actress Paula Patton). He goes on to address larger issues of close-mindedness in the music industry and the resilience of passionate artistry regardless, stating:

"I won't use the word 'racism.' I will say it's a tough--but rewarding--fight. I look at Mary J. Blige, somebody who has had only a few pop
hits and yet has changed culture, generated new sounds and inspired
leagues of artists. She's now a worldwide phenomenon. And it's because
of what she stood for; she never gave up. She kept making great music,
pouring her heart out to people."

"You can't always expect people to be as color-blind or open-minded as
you want. What you can do is keep giving your heart and soul, like Bob
Marley did. His music became so overwhelmingly loving; it was a
relentless love in a sense. Keep beating them down with love and they
can't stop you."

So, what do you think? How big of an issue is his whiteness, really?

Something Else Available 9/30 [Amazon]