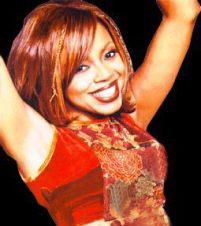 With the countdown still a fresh memory as well as a reminder of how much we still love the old school, we've been diggin' in the crates all week, looking for some hidden gems from artists that are due for album releases in the near futrue.  Today's subject is Shanice, whom we've talked about here recently, and is hard at work on her next project.  Inspired by Ro's post, we decided to check out the 1995 Panther motion picture soundtrack, where Shanice and the group Female laid down their take on the 1970 Gladys Knight & the Pips classic "If I Were Your Woman."  It seems covers are a Shanice specialty, as she sang her eight year-old behind off to Stephanie Mills' "Home" and competently tackled Minnie Riperton's classic "Lovin' You" on her debut album Inner Child.  On this track, with this cover, it's at the 1:50 mark where you can tell she gets comfortable, hitting her first run.  From then on, she owns the song, placing her in the elite company of those who covered the song with success.  A short list of one: Mills.  Enjoy this, and stay tuned as we continue diggin' in the crates for more hidden gems.

Shanice feat. Female: "If I Were Your Woman"