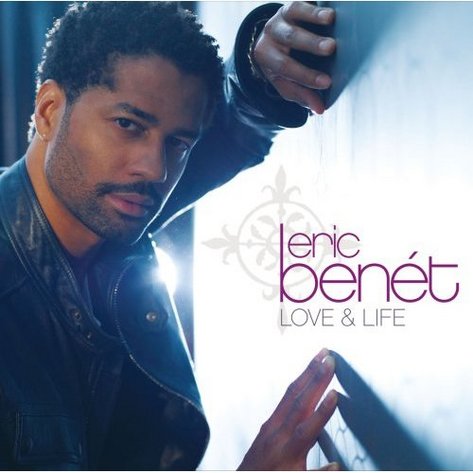 On his new album, Love & Life, Eric Benét explores the labyrinth of love, lust and life on a diverse collection that features no low moments but only highs. It's ironic that this album is entitled Love & Life because it is reminiscent of his A Day in the Life, thanks in large part to the
dance grooves that color the CD and the overall feeling of joy and happiness that permeates every song. This is a different Eric Benét than the one who sang an album full
of songs for his lost love on Hurricane. He has found a new love and has put all of the fire and passion from that relationship
onto this disc.

Anyone who wrote Benét off after his last album as a simple singer of
sad songs, will have to pick their jaw up off of the floor after one
listen to Love & Life. Whatever his lady (Manuela Testolini, better known as Prince's
most recent
ex-wife) is doing, she needs to pop her collar for influencing her
sweetheart to craft such an excellent fourth solo album. He is a new
man, with a new attitude, and it's reflected in his music, which takes
its cues from R&B, nu soul, disco and funk.


The
album opens with some serious harmonizing on "Love, Patience &
Time." From its gospel-sounding intro, the song segues into a
finger-snapping good time. Eric weaves an inspirational tale of a war
veteran and a loveless young girl over a mid-tempo beat populated by
horns and a groovy bassline.


This song leads into "The Hunger,"
which is a pleasure-filled romp put to music. Another danceable tune is
the hip-hop flavored "Don't Let Go." I can totally hear a rapper like Talib Kweli or Lupe Fiasco jumping on a remix of this one. The party train keeps going on "Iminluvwichoo." Eric and newcomer Linda Kiraly conjure up René & Angela, Yarbrough and Peoples and other funkdafied '80s groups for a true throwback record.


Please don't think that Eric just has an album full of only dance floor jams on hand with L&L.
His bread-and-butter love songs are present and tucked neatly into
pockets on the disc. We received a glimpse of this on the first single "You're the Only One," which fell in step with what we're used to hearing from Benét. The duet "Everlove" with Terry Dexter is reminiscent of his pairing with Tamia on
"Spend My Life With You" and has a bright future on wedding playlists.
And after those vows are exchanged and its time to get down to business
on the honeymoon, "Chocolate Legs" can provide the soundtrack to the
love making.


Eric keeps it sexy on the stepper's jam "Weekend Girl" and the spicy Latin number "Spanish Fly." Love & Life
ends on a high note with a trio of songs -- "Still I Believe," "Sing To
Me" and "One More Tomorrow" -- each one better than the next. The
album's closing track is a sweet lullaby of a song. "One More Tomorrow"
builds to a lush, string-filled crescendo as Eric sings of dreaming
about his love and wanting to spend eternity with her.


I didn't feel the need to fast forward at all while listening to Love & Life,
but I definitely found myself pressing rewind a few times. This album
is a deliciously satisfying musical offering. Existing Benét fans will
remember why we fell for him in the first place, and new fans
will discover what many of us already know -- that Eric Benét is one
the greatest, most versatile soul men of this generation. Love & Life is proof positive.