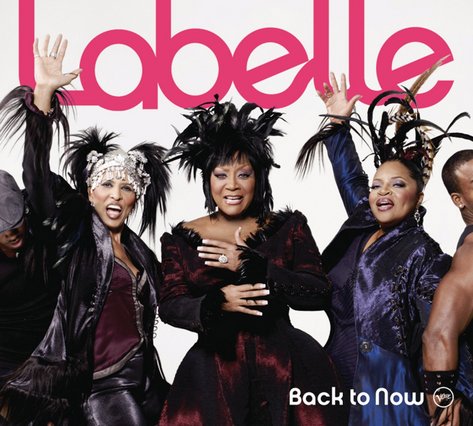 As its been widely reported, Patti LaBelle, Nona Hendryx and Sarah Dash are back together as Labelle, and they can be found in all of their feathered, bedazzled and synthetic hair-wearing glory on the cover of their new album, Back to Now. I don't know about anyone else, but I think I found the inspiration for my Halloween costume this year. And I'll be getting my groove on to Back to Now while I get dressed because the CD hits stores on October 21st, and if the first single, "Rollout," is any indication these classics may have another one on their hands. I honestly wasn't expecting to like this song as I much as I do, but once the bouncy reggae-tinged track hit my ears I couldn't stop from shaking my shimmy. I hear a little Auto-Tune in use, but I'm going to cut Patti and nem some slack because they can actually sing unlike most who rely on the program. Wyclef Jean co-wrote/co-produced the song and contributes some vocals to the track as well. Other contributors to the new album include Lenny Kravitz and Gamble and Huff, and the full tracklisting can be found after the bounce. Now if you'll excuse me, I'm going to press play again. This is my jam!

Labelle Back to Now tracklist: