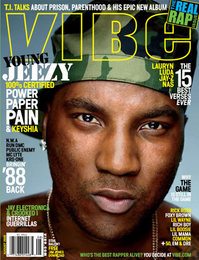 But first an apology. I was so unfair to VIBE last week when we were discussing the Robin Thicke nontroversy. My willingless to go after them so hard had nothing to do with VIBE specifically, but moreso my mounting frustration with and distrust of these magazines that once moved culture but now, don't so much, and really don't seem to try. Just my perception. But there have been good folks at VIBE nonetheless, that I love, respect or admire and have supported. With that in mind, I humbly take the L and apologize for saying "VIBE is full of sh*t." Bad nOva!

Now, you're probably wondering why, out of all the VIBE covers I could've chosen for this post, did I use the Jeezy one? VIBE E-I-C Danyel Smith has released a statement on the whole Thicke debacle and uses the appearance of Young Jeezy as an example of how a VIBE cover is a milestone in any artist's career. Yes, the VIBE Magazine of 2008 and that Young Jeezy. Keep reading.

"We have a great deal of respect for Robin Thicke and his music, and we remain flattered by his desire to be on a VIBE cover. A VIBE cover is a huge milestone in any artist's career--recent cover stars include Young Jeezy, Mariah Carey, 50 Cent, Usher, Senator Barack Obama, Eminem, Lil Wayne, and Robert De Niro, to say nothing of our 15-year history. We wish Thicke the best, and we're glad he discusses his thoughts on race and R&B in the new October 2008 issue of VIBE."-- Danyel Smith, Vice President & Editorial Director, Vibe Media Group / Editor-in-Chief, Vibe Magazine

What? Were you expecting more? Perhaps there was no point in addressing the entire thing, because maybe she doesn't see the utility in responding to such an outrageous allegation. Maybe someone lied to Thicke, or someone lied on Thicke and he never said it to begin with, or maybe he was high. At any rate, we may never know what really happened and the best thing is to not villify either party. You know how things get all twisted and turned around in the grand convoluted world of media and how much of it serves to bait and manipulate us, the audience.

We're bigger than that.


TAGS:  robin thicke, vibe magazine, young jeezy
Previous: What’s the Most Played-Out Trend in Hip Hop and R&B Right Now? Next: Morning Soul: Come On Shortie If You Think You Can Roll