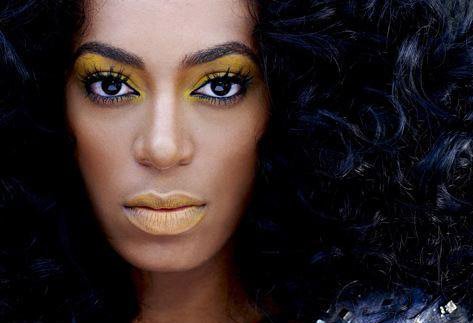 Oh, Solange. After uncomfortably watching her clumsily throw sass in frustration at that news anchor and then gazing in amazement at the response video she released soon after, it appeared as though the increasing momentum built by the debacle might positively affect record sales for her then forthcoming album Sol-Angel and the Hadley St. Dreams. Even before all of that it seemed she was on the road to at least moderate success after her first single "I Decided" was warmly received. Now with a week's worth of sales it appears that it might all have been vain.

Over at Brown Sista it was mentioned that Solange's album will not make it to the Billboard Top Ten. Upon further investigation, it appears that it didn't even break the Billboard Top 100. So, what can we make of such an underwhelming performance on the charts?

Of course it stands to reason that even despite her declarations of independence from her sister, she will always be the other Knowles.
She is fighting an enormous battle to establish herself as an artist in
her own right, one that hasn't been won by any member of Destiny's Child who has gone solo. And they don't even have a sharing of blood to contend with.

However, a larger issue is the fact that Solange's album failed to sell
after being made widely available and for exceptionally low prices. It
can be purchased at major retailers like Circuit City, where it is
offered as an exclusive release. Plus the entire digital
album is available on Amazon for $6.99. Not charting after almost a week in sales of a cheap album,
an increase in press and a decent response to the first single is
distressing. If listeners are unwilling to give Solange a shot in hell,
what does that mean for upcoming releases by other R&B and soul
singers like Jazmine Sullivan and Jennifer Hudson?

Perhaps it's just that contemporary audiences are less likely to
purchase music since you can bootleg most of it online. Maybe it is that people just don't care for Solange's music and were not persuaded
by recent events to put down even a nominal amount for her album. It
very well might be the result of the combination of a sophomore slump and her
family ties.

Regardless, low sales like this cannot bode well for soul music and its tributary genres. Even if it is Solange.


TAGS:  beyoncé, destiny's child, jazmine sullivan, jennifer hudson, solange
Previous: Another ‘Unauthorized’ Leak, Another Artist That Doesn’t Get It Next: Terrence Howard Drops This Week. Are You Buying?