People Under The Stairs Dream of Expat Status In ‘The Wiz’

Ill Mami
September 30, 2008 | 2:00 pm
4 comment
I have often longed to join the flocks of Americans who have uprooted themselves from their familiar environs to set out to live in faraway lands. Having been seriously considering becoming an expatriate myself lately, I now have Australia to add to the list of lands that I can dream of residing. In "The Wiz," People Under The Stairs ' Thes One and Double K not only rhyme about visiting the native kiwis Aussies down under, but they got to shoot the video there as well. And just in time to coincide with the release of their new album Fun DMC which becomes available today. And let me be the first to tell you that not only will the beat of this song set you adrift on a memory of bliss, but the visuals that accompany this video are absolutely beautiful. Enjoy.


TAGS:  double k, people under the stairs, thes one
Previous: How Many Mary J. Blige’s Can You Fit In A Chevy? Next: Could 112’s Slim Be Bringing Us That Long-Awaited Faith Album?

Break Out Your Butterfly Collars, The ’70s Are Back 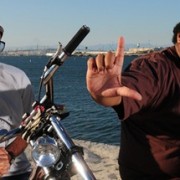 People Under The Stairs ‘Hit’ The Mark Once Again

Rappin’ Rick James: Like The Rappin’ Duke But Infinitely Better