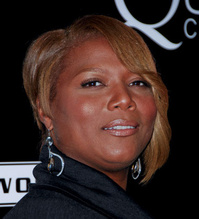 After gaining a new audience with her jazzy adult contemporary albums, Dana Owens Queen Latifah is going back to where it all started and making her return to hip hop with a new album scheduled to be released this December. Latifah has worked with Dr. Dre and LL Cool J on the upcoming set that she contemplated naming The L Word with her tongue planted firmly in cheek in response to rumors about her sexuality. Now whether or not Queen likes to eat at the Y is none of my business; I'm just happy as a clam about the possibility of her reclaiming her throne if this album is on par with her past work. In addition to Dre and Uncle L, other contributors include Missy Elliott, Swizz Beats and Busta Rhymes may make a cameo. It would have been nice to see some fresh names in the mix aside from the usual suspects, but I'll save judgment for after I hear the music to see what these producers/artists bring to the table. I have to say that I'm cautiously optimistic about this project from one of the best females emcees to ever pick up a mic. Give it to 'em, Queen! [RS]