Quincy Jones Is Through With Michael Jackson, Has Tribute Album in the Works 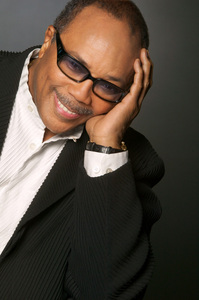 Well so much for my wishful thinking that Quincy Jones might reteam with Michael Jackson on his new album because that has about as much chance of happening as me voting for McCain/Palin.

When speaking to Roger Friedman from FOX News at a recent all-star fundraiser, Q made it crystal clear that his time making music with Michael was done and that they both need to move on. According to Quincy, recording Mike's comeback album would be too grueling a process, and he doesn't have time, quite frankly. As he told Friedman about how long it took to record the last two albums they collaborated on: "Thriller took 12 weeks. Bad took three years." Whoa. Can you imagine how long Michael's new album will take to record and perfect -- and record some more? Right. Quincy is 80,000 years old; he's not trying to hear all that.

But what he is trying to hear are the melodic sounds coming from artists such as Mariah Carey, John Mayer and Usher who
have been enlisted to perform on a tribute album that is scheduled to
drop next spring. Two dozen of today's hip hop and R&B stars will
appear on the compilation performing new versions of Quincy's hits.
This project will either be another Jones masterpiece or a disaster
depending on who else is involved on the set. Quincy has yet to
disappoint on his albums, but there's a first time for everything.

In other Q news, he's a little miffed that he has yet to be inducted into the Rock and Roll Hall of Fame. At the same event, he also shared with Friedman that he's all but given up on receiving the honor and thinks that Rolling Stone publisher Jann Wenner is behind the shut out. Looking back on Jones' illustrious career and his many contributions to numerous genres, I would have to agree that he has a right to be salty for the slight. There's always next year, Quincy.