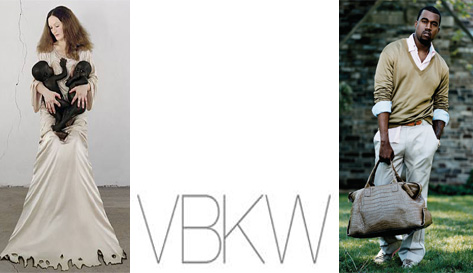 Kanye West has finally given me a reason to lose any sliver of interest in his music by choosing to "collaborate" with artist Vanessa Beecroft. There are a myriad of interpretations that could be forced upon the listening party that happened this past Tuesday for his new album, 808s & Heartbreak; while the album played uninterrupted in a Los Angeles gallery, a group of naked women Beecroft installed (first hand accounts put the number between 40 and 50) posed in front of a wall of bright lights. It might even be a great exercise to investigate one through the lens of a fancy theorist like Guy Debord and meanderingly resign that this is "A"rt as if that explains anything. Oh the spectacle! Oh the innovation! What an interesting articulation of the intersection of art and commerce! Whatever. It was a listening party foregrounded by naked women.

West and Beecroft were a perfect match in that they are one-trick
egotists who produce vanity projects that are entirely overrated and
are increasingly unremarkable. Other than Kanye's announcement at the event that
he's always liked Beecroft's work, there is very little connection to
be made between the two aside from their obsession with fashion and
their shameless self-promotion. Taking into account the "Love Lockdown"
music video, this may be, at best, another in series of flimsy articulations of Kanye's frustration
with materialism or, at worst, a showcase of misogynistic tendencies masquerading as creativity. For
Vanessa Beecroft it was just more of the same; the majority of her
performances for the last decade or so have included partially clothed
or nude women.

Perhaps this could be a trite attempt at postmodern
ambivalence but even that is taking it too seriously. The clearest point is that Auto-Tune and titties sell. And by all accounts the
listening party/artistic collaboration was full of both. [RU/FDR/RS]


TAGS:  art, artist, auto-tune, kanye west, vanessa beecroft
Previous: If You’re ‘Cool,’ Then You’ll Probably Think Anthony Hamilton’s Video Is, Too Next: FULL DISCLOSURE: When Did You Have Your Moment of Clarity?