NYC Bouncers: Win Tickets to Rock the Vote at S.O.B.’s Next Week! 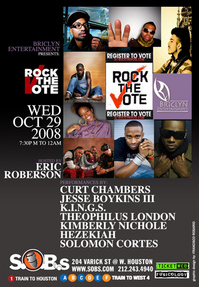 The treats just keep coming for New York City Bouncers. SoulBounce, in association with S.O.B.'s and Briclyn Entertainment, is giving away a pair of tickets to attend the Rock the Vote concert on Wednesday, October 29th in the heart of NYC.

The Rock the Vote show at S.O.B.'s will be a party with a purpose as everyone gathers to hear some good music and mobilizes to "Barack the vote" on November 4th. The show will be hosted by our good friend Eric Roberson and feature SoulBounce faves Curt Chambers, Jesse Boykins III and Hezekiah alongside fellow indie soul & hip hop artists K.I.N.G.S., Theophilus London, Kimberly Nichole and Solomon Cortes.

We're giving away one pair of tickets to whoever wants to go Rock the Vote next Wednesday at S.O.B.'s, and all of the details on how to enter are after the
bounce. Tickets are also available via TicketWeb or at the S.O.B.'s box office for the bargain price of $10 or $12 on the day of the show.

Here are some Curt Chambers and Erro goodies from my vault to give you a preview of what you'll be in store for at the show: