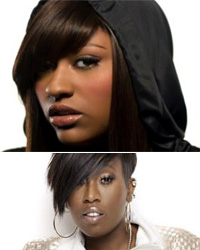 I get that Missy Elliot could be an important figure for ambitious young singers and performers. She has used her industry pull to propel the careers of her protégés, like Tweet and Ciara, into success they might not have attained without her endorsement. You can't argue that at least some of Jazmine Sullivan's popularity and debut album reaching #6 on the Billboard 200 can be attributed to Missy (who helped get her signed to J Records). However, more of it probably has to do with the fact that Jazmine is exceptionally talented, has put together a solid album and that she's been working toward this moment since she was a child. Since Missy's hyping on "Need U Bad" served its purpose and Jazmine is doing well, their relationship is officially on Pied Piper Watch. The frustrating part of having a protégé is that the endgame is always for them to establish independence from their mentor. Those are the rules. Any future unnecessary reference to or flagrant presence of Missy will be henceforth be deemed suspect. Not sinister, just suspect.