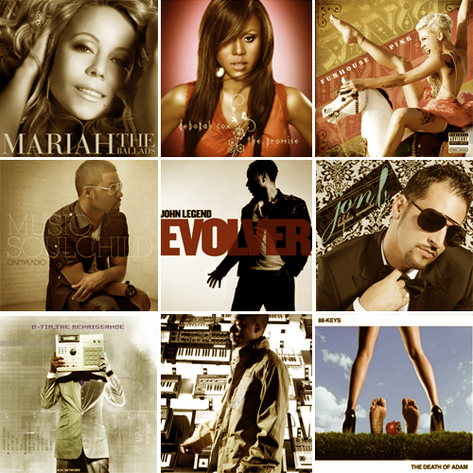 This is what you call being "servicey." What you see above is a snapshot of releases over the next couple of weeks. We know it has been a while since we've done one of these and, honestly, we have no excuse for leaving you hanging. But in the interest of moving forward, what do you plan on buying? Speaking for myself, my eyes go straight to the lower left of the above graphic. I've been waiting a month of Sundays for The Renaissance.

Finally, a Mariah Carey album I can get behind! Only, it's music we already have and it is an import! This is so evil. It's called The Ballads, and has already been released in a bunch of countries that aren't the U.S. This will be the case until January when we won't have to pay almost $30 for this magnificent trip through history, which doesn't include tracks from E=MC2, The Emancipation of Mimi, or Charmbracelet (Sony is still apeing her pre-Def Jam catalogue). Also, can someone please explain to us the logic of including "All I Want For Christmas Is You"? Methinks that's not a ballad. [Amazon 10/28]

John Legend's Evolver drops this week, but it seems like it was released weeks ago. Oh. It leaked. I hear it's a pretty good album, so all you fans have nothing to be worried about. Evolver includes appearances and production from Estelle, Brandy, Andre 3000, Kanye West, Will.I.Am and The Neptunes. Sell that album, John! [Amazon 10/28]

Jon B is back with Helpless Romantic. Fingers are crossed, because "It's U" rides the Auto-Tune train to Hell and "Oh So Sexy" features Paul Wall. But Jon B holds a very special place in our hearts and even when he's wrong, he's oh-so-right. Also, we have a special treat on the way for all you Jon B fans. Stay tuned! [Amazon 10/28]

Black Milk's Tronic is highly anticipated for this editor. Between "Give the Drummer Some" and "Losing Out", this cat will never know wack. His skills as an MC have grown exponentially since Popular Demand and he's experimenting with different sounds. This is definitely a case where growth means evolution instead of change. Tronic is streaming over at his Myspace page. [Amazon 10/28]

Because we're typically on R&B and Hip Hop duty, it wasn't until recently I realized Pink had
a new album coming out. Her lead single "So What" went #1 all over the
place, according to Pop charts I don't pay attention to. But I love
Pink. I wish she was still working with Linda Perry but it can
be overlooked in the face of her new drama. As many of you know, Pink
got divorced, and oftentimes man-trouble puts female artists in a zone.
This isn't to say we want our artists to be down in the dumps, but we
love emotion and we love it when they have a story to tell. [Amazon 10/28]


On Election Day, the wait will be over! One of the Nine Avatars of SoulBounce, Q-Tip, is finally dropping The Renaissance, an album we had the pleasure of previewing a few weeks back. I'm slightly pissed it leaked because Tip is THAT DUDE, but it happens to the best of them. In closing I will say this: You better buy Q-Tip's album and you better vote that day, lest you incite the wrath and judgment of the SoulBounce gods. They don't negotiate. [Amazon 11/4]

Immense apologies for not bigging up 88 Keys more on this website, but his Death of Adam is on way, co-executive produced by Kanye West and featuring the likes of Bilal, J*Davey, Redman and another of SoulBounce's Nine Avatars, Phonte. Every indication from the guestspots to the concept point to this being a pretty dope outing. Check out some snippets here. [Amazon 11/11]

After polarizing our audience with "Radio", Musiq Soulchild has redeemed himself with "If U Leave" and "So Beautiful." OnMyRadio supposedly drops 11/11, but reports elsewhere have confirmed it as 12/9. For the purposes of this post, we'll use the Amazon date. Renaissance man Kanye West appears, as well as Mary J., Common and Chrisette Michelle (perfect casting). On the downside, we have 50 Cent, Lloyd Banks and Shawty Lo. So there's a little something here for everyone. (I'm trying to be positive.) [Amazon 11/11]

Rounding out our shopping guide is one of our favorite divas Deborah Cox, who returns with The Promise. In spite of her dance remixes gaining more momentum than her R&B singles, she's a superb vocalist who we always seem to miss when she's away too long. "Beautiful U Are" is still streaming on this site if you want to check it out. [Amazon 11/11]

So let us know, SoulBouncers. What are you planning to buy this week, next week, and the week after? Take the poll (it's multiple choice) or list some albums in the comments that aren't mentioned here. Remember: Real fans don't download for free.