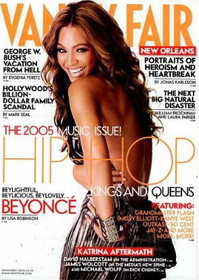 In honor of Vanity Fair's 25th anniversary, the magazine's editors have created a Top 25 List that includes everything imaginable, from book covers to parties the likes of which Prince attended but not you. The latest "best of" list to drop? You guessed it! Vanity Fair's "Best 25 Songs!" Not that it compares to our magnum opus of Top 100 Soul/R&B Song Countdown, but there are some great cuts on the list. "Take Five" by Dave Brubeck, the same song that ushered in West Coast Jazz, "Goldfinger" by Shirley Bassey, and John Coltrane's "My Favorite Things" are all well represented on a list that looks as though it was composed by someone who is under tenure, smokes pipes, and wears corduroy blazers with elbow patches. But what's surprising is that while the Motown sound is well represented, my choice for top Hip Hop song, Grandmaster Flash & The Furious Five's "The Message" is included here, too. Currently, The Beach Boys' "God Only Knows" is pouncing the competition. And I'm not mad since, as a listener to more than just Hip Hop, this is one of my favorite songs ever. But while we're on the topic of non-Soul songs, what are some of your favorite non-Soul tracks of all time? I'll go first: Journey's "Who's Crying Now."

TAGS:  beach boys", beyoncé, dave brubeck, grandmaster flash and the furious five, john coltrane", journey, shirley bassey
Previous: FULL DISCLOSURE: When Did You Have Your Moment of Clarity? Next: Oh No! Busta Rhymes Turns To Techno.