Whose ‘Side’ Are You Taking? Angela’s or Jennifer’s? 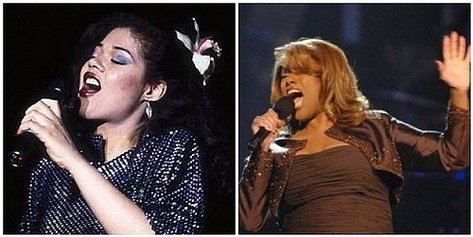 It's a weird time right now. A reflective time, especially with so much going on--from the Chicago suburbs to the campaign trail. And, as always and with everything, music is there to carry us through. So today's battle, if you want to call it that, features two distinct takes on the classic "I'm On Your Side" by two of the best that have ever done it vocally--Angela Bofill and Jennifer Holliday. Angela's version was the original, featured on her 1983 Teaser album. Her take, which quickly became a top ten chart hit, is very restrained, yet gorgeous. Ms. Holiday not only chose to cover the song in 1991, putting an indelible mark on it, but even went as far as naming her album I'm On Your Side. Her version also peaked in the top ten on the charts, and features everything we know her for--pitch, passion and power. So, even if you don't feel like ranking one version above the other, at least take a listen. It could be, like music so often is, a necessary elixir for what ails. Or just great music. Enjoy.

Angela Bofill: "I'm On Your Side"

Jennifer Holliday: "I'm On Your Side"