Home I Was There, Listicle 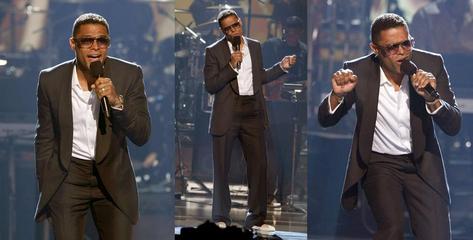 Let's just start here: There's no way on God's green Earth that I could ever come close to this stellar review of the Maxwell experience. So I won't even try. However, with that said, since I was in attendance at last night's tour-closing performance featuring the amazing Jazmine Sullivan and the Eclectic One himself here at New York's United Palace Theater, and with this being the week of giving thanks, please see below and after the bounce my list of the 10 Things I'm Thankful For after attending my first-ever Maxwell show.

#10: The weather. Surely, if this concert were held during the summer, we would've peeped poorly-conceived patterns and portly paunches painfully protruding over painted-on pants. But alas, that's not the best New York has to offer. Nope, nothing brings out the best (and worst) in City folk like cold weather. From full-length furs to three-piece suits, last night was a veritable fashion show. And that was before you even stepped foot inside. And with Maxwell in town as the catalyst, making it the perfect date night, my people got those special outfits together and strutted Uptown. Good times.

#9: The security. Um, there was none. You would think that with that many scalpers (seriously, there was one for each patron) and unseemly characters hovering outside the venue, that there would be a bigger police/security presence. Not. At. All. Thankfully, everyone inside was on their best behavior, and no one pulled anything from their floor-length coats, but still. United Palace, we have to do better.

#8: Jazzy's background singers. They bounced, they cooed, they wore their wigs with pride. And I loved every minute of it. It seems that during every concert I attend, my eyes gravitate toward the background singers. The way they sing, their dance steps...everything. And these young ladies were into it from the first note. It's hard to keep up that type of energy. Kudos to them.

#7: The new material. It's the first concert I've been to in a while where, when the artist sang new material, the crowd didn't shrug it off and start amusing themselves by talking up a storm (See Scott, Jill.) People were actually trying to sing the chorus along with Max by the second choruses of the new stuff. At first, it threw me off. Then  it made me smile. "Pretty Wings," indeed.

#6: The brass section. Admit it. Any time you hear a trumpet or saxaphone solo, you smile. That's because the instruments are not only dope, but the sounds they produce are like punctuation marks to a singer's voice. The perfect complement. Too many artists overlook the brass, thinking that it's a luxury they can do without. Thankfully, Maxwell didn't, and in fact, featured those gifted musicians on more than one track.

#5: The theater. We all know that the wrong venue can make or break an artist. For example, right after he first came out, Musiq Soulchild made the mistake of appearing at Madison Square Garden as an opening act, singing tracks from his debut CD. And sounded horrible, because the acoustics in the large arena didn't lend well to his vocals. We know Musiq can sing, and if he were to appear in a smoky hole in the wall, he'd likely blow us away. Certain artists, certain venues. I can't speak for the Radio City show, but having both Maxwell and Jazzy at this smaller venue gave their voices an extra sumthin'-sumthin'.

#4: The estrogen. All I did last night was smile. Like cheesin', smiling. Almost every lady in the place came to impress for their favorite R&B singer. There was no panty-throwing (except for the choreographed, from-behind-the-stage variety). However, there was a receiving line for kisses and handshakes down by the stage. DURING the show. And with this being the last stop on the tour (and his hometown), Maxwell obliged each and every one of them. Me? I appreciated them all, too. Even the two young ladies that almost got beat down for planting themselves at the balcony's railing, impairing the view of some rabid Max fans. They escaped without injury. Talk about fortunate.

#3: The "Ascension" a capella. With that arguably being his most famous song, Maxwell hit the stage for his encore with the high notes that kick off "Ascension (Don't Ever Wonder)," started the first verse--a capella--and then let the crowd take over. Mannnnnn, listen. I got chills as the entire crowd--men included--sang each note. Loudly. An incredible moment. Not the main highlight of the night, but definitely one of the biggest.

#2: "Lions, Tigers & Bears." If you've never heard this song, no turkey for you on Thursday. You're on punishment. It's that good. And if you've never heard this song live, then you're missing out on not only the turkey, but the entire meal. Jazzy's voice is amazing, to be true. But singing this song, she causes you to fall into a trance. It's like you're a baby listening to the greatest bedtime story ever, or there's a mobile above you with little lions, tigers and bears accompanied by the sweetest melody ever.  For real, she's hypnotic with hers. Please catch her on tour when she goes back out. That song alone is worth the price of admission.

#1: Raspy Max.  After two solid months on tour, going from coast to coast and beyond, it's reasonable for an artist to lose their voice. Or for it at least to be strained. That was Maxwell last night. Add to that the long, long, long hiatus that he's been torturing his fans with on, and it's a wonder he had anything left as the tour wrapped. It was his love for his hometown Brooklyn, he said, coupled with a nervousness that made him want to excel, that carried him through the night, and gave his voice that extra texture and desperateness that can only be compared to a baseball pitcher throwing on short rest, or a basketball player playing on back-to-back nights. Those athletes have to dig deeper to put their best effort forward, as did Maxwell last night. He put in extra work on "This Woman's Work", and did his best to knock down "Til The Cops Come Knockin'." Just a great performance, and a great introduction to his live show. I'm glad I was there. Besides, with his voice perilously on the edge throughout, I could've been in the house on the night when Maxwell pulled a Peter Brady. That...would've been priceless.