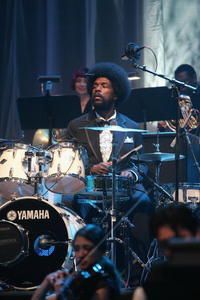 We were all there when the news broke over the weekend. ?uestlove revealed that he and The Roots crew would cease touring because they were recently hired as Late Night's new house band as the show transitions from Conan O'Brien to Jimmy Fallon. This presents obvious pros and cons for fans of the group, pro being you get to see them five nights a week. The con is obviously that they won't be performing joints from their own catalog every night. We're under the impression that this news was meant to be on the hush, as there's been no official statement from the group and that YouTube where ?uestlove delivered the news has magically disappeared from the Internet (requisite OKP link is dead, too). With that being said, our partner DJ Stylus, ever the optimist, provides a list of why this "retirement" is pretty awesome. Count the ways after the bounce. And remember, you have until March to see a "real" Roots show.

I understand the pain, but there are many reasons why this is made of awesome.

[1] Brothers are gonna get an EASY paycheck. The music industry is still mad unstable, even for ground-breaking Grammy winners. These cats have earned the right to not have to bust their asses so hard to make a living.

[2] Exposure: More of the music industry and the public at large will get to know who they are. As iconic as ?uestlove is, he still gets played to the left in the entertainment biz when people have no idea who he is. And we all know how criminally underrated Black Thought is in Hip-Hop. Not to mention the poor sales record of Roots albums.

[3] This is a band that has been living on tour buses and airplanes 200+ dates a year for 17 years. Why do you think Hub left the group? These dudes have kids and families. They'll finally be able to live a normal existence.

[4] More time for writing, recording and doing outside projects. ?uestlove already has a huge rep among his musician peers and has done lots of amazing non-Roots related work. Maybe Tariq Trotter might get more opportunities like that. Captain Kirk too.

[5] They'll get even tighter from playing together 5 nights a week. I predict good things from forthcoming Roots albums.

[6] We'll still get to see them. They'll still do shows within quick striking distance of New York. The far-flung fans are the ones who will suffer.

The only downside I can think of is that Fallon ends up stinking up the spot and the show bombs.