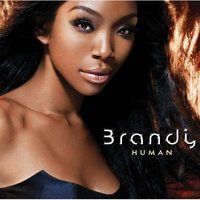 Last week Brandy released her long-awaited fifth studio album Human. Reviews have been generally favorable (on the positive side of "average" with a few digs here and there) and, to be expected, many cite her personal drama in their critical write-ups. These matters are fair game, since they helped shape the atmosphere and focus of the album--one that is contrite, bittersweet and hopeful. For anyone that was looking for more "Turn It Up" and "I Thought", put it out of your mind. It will probably take another album or two before Brandy makes you shake your ass again.

Brandy has been missed while she has faced some serious challenges - including being involved in a 2006 car accident that killed another driver - since her underrated 2004 release, "Afrodisiac." But the former "Moesha" star has never made a bad album, and she's not starting now with the appropriately rich and varied "Human."... "Human" is better than good enough. It's a light, breezy listen that shows off Brandy's resilience, humility, joy, and vibrancy.

Human is easily the most platitudinal Brandy album, but it is no less compelling for it, even when blocking out the complicated context of the singer's personal life. Renewing her alliance with Rodney Jerkins, whose production and co-songwriting work dominate the album's first half, Brandy is clearly in a comfort zone that enables her to open up more than ever.

Unsurprisingly (if you've read a tabloid over the past five years), contrition is Human's major theme. She's sorry. She's learned from her mistakes. She's more mature...except where her voice is concerned. The huskiness that defined Brandy's prior work has been replaced by wispier and higher tones. The result is pleasant but far less ambitious than her last CD, 2004's Afrodisiac.

On "Human" you can hear Brandy striving (understandably) to express herself, yet the result rarely rises above diary-entry tedium. "The whole world is freezing / Need to warm it up with love," she pleads at one point. The few highlights come when Jerkins, who helmed most of the album, including the catchy lead single, "Right Here [Departed]," manages to dial down Brandy's introspection and increase the groove factor.

Human, Brandy's fifth studio album, is full of mid-tempos that really display Brandy's ability vocally. I think that most of the material was crafted for Brandy to flex her vocal muscles, and finds her at her most open and free. Coming from Afrodisiac, I was expecting some more up-tempo tracks, and admittedly, at first, Human dragged a bit for me, but the pace of the album has surely caught up with me after playing it a few more times. What really rings is the fact that Brandy recorded material that was really true for her. This album is a testament to all that she's been through over the past few years, and I respect that about her.

Take the poll if you've heard the album and leave your thoughts in the comments.


TAGS:  brandy
Previous: Morning Soul: Love Takes No Less Than Everything Next: Beyoncé Is A Rolling Stone. . .Winner