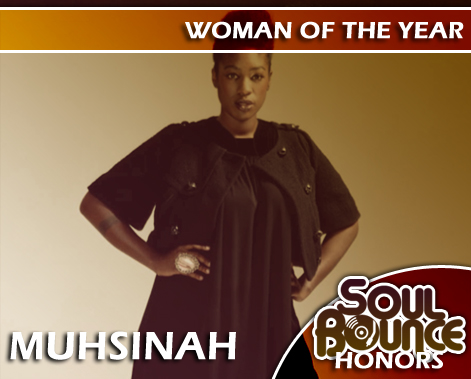 Continuing with SoulBounce Honors Week, it is our pleasure to honor Muhsinah as our Woman of the Year. She has long been considered Bounce-Worthy here, and this year she took major strides, gaining recognition for her fantastic album Day.Break and her inventive, totally unique vocal and production style. Instead of bending to the fickle and uninspiring music industry at large, she continued to
bend it's tastes in her direction. Not only was she featured in several print media magazines like XLR8R and Trace, and released a few projects both as web exclusives and as CDs.

But the real beauty of Muhsinah is her captivating ability to add conceptual gravitas not only to her solo music but also to the collaborative work she's done. One needn't look any further than her contributions to The Foreign Exchange's Leave It All Behind to understand that whatever she appears on grows infinitely more interesting and rounded. On "Daykeeper" she adds layers of vocal thickness and sweetness to the song, enveloping SoulBounce Man of the Year Phonte's voice, in a way becoming the keeper she sings of being. Her appearance on "Changes" with Common is one of the best things going for Universal Mind Control, signifying newness and adding a thoughtfulness that is refreshing.

Being smooth and melodic are definitely traits of hers, but jill of all musical trades Muhsinah adds complexity to them through her willingness to be experimental. She does things to her sound that others could never envision nor have the sonic fortitude to pull off in any way. She is woman of the year because regardless of how or where she appears, things bite with her freshness and instantly become more profound. Her ability to challenge us listeners to understand harmonic structures and vocal intonations has given her an edge that few women in music this year have attained, and none in a way even remotely similar to hers. She is on her way up, expanding what progressiveness in music is all about.


TAGS:  common, muhsinah, phonte, the foreign exchange
Previous: Ne-Yo and VH1 Save The Music Bring Holiday Cheer to an Atlanta School Next: Morning Soul: Can’t Keep Running Back To Me