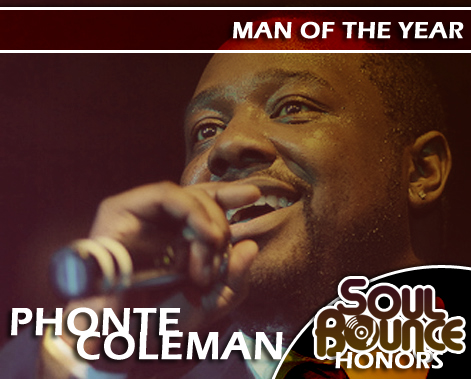 This week, we at SoulBounce would like to introduce to you to those people, places and things that captured our hearts and minds this past year. The SoulBounce Honors seeks to bring recognition to those that may have fallen short of the radar that popular culture chose to ignore. For us, and hopefully for you too, these are the gems that made life a bit sweeter this year. That being said, we would like to honor the inimitable Phonte Coleman.

Phonte has proven himself to be the hardest working man in show business this year. Not only had he managed to drop an album that had all of us '80s babies shrieking with excitement, Zo! & Tigallo Love The 80's, but he also managed to release one of the best albums of this year and in several years past, Leave It All Behind. Waxing poetic about the mature love featured on that album with cohort Nicolay could last all day, and hopefully this glowing review did suffice. It's no wonder that cuts from this album made it onto the Top 10 lists of nearly every editor on SoulBounce. And let's not forget the veritable sideswipe that took us all by surprise when a certain Jazzanova track had us all two-stepping in the name of love.

But one also has to wonder how someone who so reveres the soul music that he helps to create is able to change channels and find the vein to drop bombs as part of hip-hop duo Little Brother? Is it due to his unflappable humor that we all giggled to when listening to his Gordon Gartrell Radio podcast with DJ Brainchild on the ones and twos? Is it due to the fact that he was born to perform? Is it due to the fact that he is one of the humblest and funniest industry cats we know? It is all of these things and more that makes Phonte SoulBounce's Man of the Year. It is truly an honor to award him with this accolade. So, while we have no trophy or trinket to present to him, hopefully our hearts and continued awe will do. Thank you, Phonte, for making our adoration of contemporary soul and hip-hop music that much easier to love. And for reminding us all that the music will never, ever stop as long as you're around.