It's all fun and games until someone says something stupid, or continues singing after their brother passes out on stage. Today we're counting down The Top 10 Worst Moments in Black Music, and most of it isn't very funny at all. More like SAD. Perhaps when we do this list next year, we'll all be able to engage in hearty communal schadenfreude instead of our side-eyes doing the jitterbug.

#10: ARETHA FRANKLIN VS. EVERYBODY
2008 was quite the year for this legend wasn't it? I think maybe she released a Christmas album, right? At any rate, Aretha Franklin kept us in stitches not only by somehow murdering "Touch My Body" (which was already D.O.A.), and drawing the ire of PETA (who, admittedly, picks on rich people for GP) but with her well-publicized beef with Beyoncé and Tina Turner. Now we all know how highly Bey regards Tina, so it is without question that she would refer to her as "The Queen". Aretha responded from her Clock Tower in the Haunted Forest that the Grammy writers and Bey were courting controversy, which sounds more like a threat than an observation. Then Beyoncé's father Joe Jackson Mathew Knowles told Aretha to sit down somewhere, while Tina Turner offered "Oh that crazy ReRe always got jokes!" And then Aretha told Tina to go to Hell, right before pretending Beyoncé didn't exist. Oh, what hell you have wrought, Beyoncé!

9. THE DRU HILL "FIGHT"
We may have been born yesterday but we know a PR stunt when we see it. Dru Hill had us talking about them for a good 36 hours when they appeared on 92Q in B-More, announcing they were reuniting with the original line-up. It was all peace and love until Woody said "Jesus is way more awesome than Sisqo, so I am leaving the group!" Then Sisqo was all "Why you ain't say that before we got ON THE AIR WHERE EVERYONE COULD WITNESS IT AND ANTICIPATE OUR NEXT RELEASE?!" He then proceeded to stomp about and wave his arms frantically because Woody had also hidden his pot o'gold. Weeks later Dru Hill held a competition where they auditioned new members and ended up choosing some dude they already knew. Then a new Dru Hill song came out and everyone hated it. Jesus is looking real good now, huh Sisqo?

8. MY BROTHER'S BURDEN IS NOT MY OWN.
We take no pleasure in seeing Jojo Hailey collapse on stage, because we love him. We also love his crazy brother K-Ci, who heard Jojo hit the stage with a loud thud, turned and saw him lying there, then kept right on singing. We understand that you are supposed to perform through a fall (hell, all three members of Destiny's Child taught us that), but only when someone is able to get right back up and might not be dead. He didn't even have the decency to pack some smelling salts! 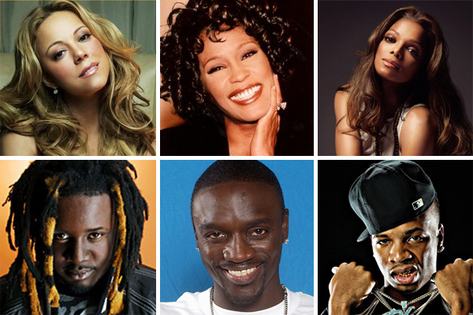 7. OTHERWISE LEGENDARY DIVAS WORKING WITH... THESE GUYS
These are the ladies that have provided us with countless years of amazing music and have typically steered away from the low-brow. Not in 2008! We don't begrudge any singer the opportunity to appeal to a wider audience and receive a check in the process, but this got way out of hand this year. First Mariah said "To Hell with the full range of my voice" and employed the ubiquitous T-Pain for "Migrate." Then Whitney Houston released a buzz single with T-Pain's law-abiding mentor Akon. But none of that could compare to Plies' "Bust It Baby," which was already a steaming pile on its own before some genius named Jermaine Dupri had to add his poor, put-upon girlfriend Janet Jackson to the remix. We are just counting the days until Celine Dion does a record with Paul Wall. Ugh!

6. T-BABY: THE PRIDE OF DETROIT
I mean, what can you say, really?

5. L.A. TIMES JOURNALIST PLAYS HIMSELF
Haha @ Chuck Phillips! We were already dumbfounded that, after all these years, he managed to find a way to cleverly re-invoke the Tupac/Bad Boy rivalry and get plenty of media attention. Only thing was, his claim that Diddy had intel that Tupac would be attacked (and eventually shot) back in 1994 was based on forged documents that didn't even look authentic! See, this is what happens when you want attention: someone else that wants more attention will exploit you for their own wicked purposes. Besides, there are so many more relevant and recent reasons to pick on Diddy. 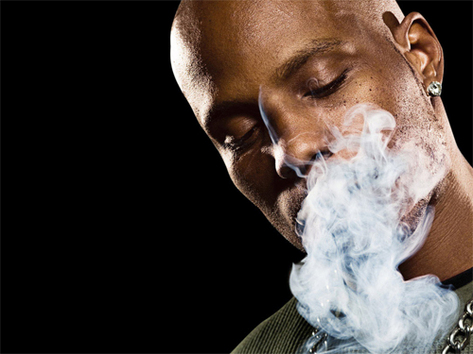 4. DMX DOESN'T WATCH THE NEWS
Not that we expect much in the way of common sense when it comes to DMX, but geez! You would think once we had a viable Black candidate running for the highest office in the country that ol' Earl would wise up for, like, five minutes? Upon learning that not only a Black man was in the running but that his name was Barack Obama, X responded with "What the f*ck is a Barack?! Barack Obama. Where he from, Africa?" Le sigh. That would be funny if (1) DMX's sense of humor wasn't dripping in nignorance, and (2) it's actually not funny. So he must've meant what he said. He was also unimpressed that a person of color was running for office (and by all accounts, at the time, had a good chance of winning), stating: "What, they gon' give a dog a bone? There you go. Ooh, we have a Black president now. They should've done that sh*t a long time ago, we wouldn't be in the f*ckin' position we in now. With world war coming up right now." Oh, we get it. DMX doesn't watch the news because he's tired of seeing himself on it.

3. "DEFINE TEENAGER."
It's all downhill from here, people. We knew that if R. Kelly was found innocent of various counts of child pornography that he would continue to bless us with insipid ghetto chickenhead track after insipid ghetto chickenhead track, employing every hood motif from hair-braiding and mambo sauce to E-Z Widers. It makes sense that he would sit down with BET after his acquittal--a network that is run by Negroes so dense that a Black man running for president wasn't enough reason to balance their programming with more news and current events. At any rate, Touré, who seems to have the worst luck with interviewees (see next item), pointedly asked R. Kelly "Do you like teenage girls?" R. responded with "When you say 'teenage' how old are we talking?" Cut to: Touré wondering if he's being paid enough to endure this bullsh*t. R. went on to say that he has some nineteen-year-old friends. That he likes to pee on. 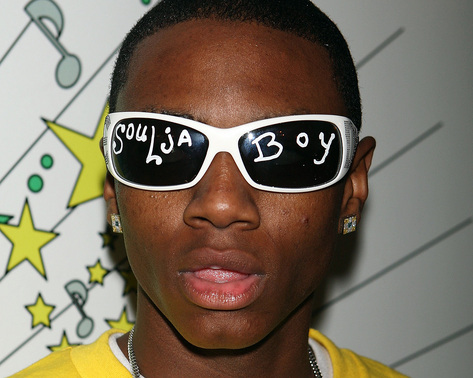 2. "SHOUT-OUT TO THE SLAVEMASTERS!"
Soulja Boy is The Worst Person in The World for many, many re
asons. Up until recently, we thought his phenomenal level of ignorance was simply a product of his fame. Sometimes when folks get famous, they become arrogant because of some misguided sense of invincibility, then the arrogance becomes vast stupidity and madness. We prefer madness because sometimes it provides a hearty chuckle. But stupidity is a no-no, especially when it comes at the expense of our ancestors. Touré, for some inexplicable reason, found himself asking Soulja Boy a question that required critical thought and consideration--functions this young man is astoundingly incapable of: "What historical figure do you most hate?" Since Soulja Boy didn't understand what a "historical figure" was, Touré listed a number of examples--"Hitler, bin Laden, the slave masters." This resulted in Soulja Boy declaring "Shout out to the slave masters! Without them we'd still be in Africa. We wouldn't be here to get this ice and tattoos." What's next, an instructional dance song called "Crank That Apartheid"? 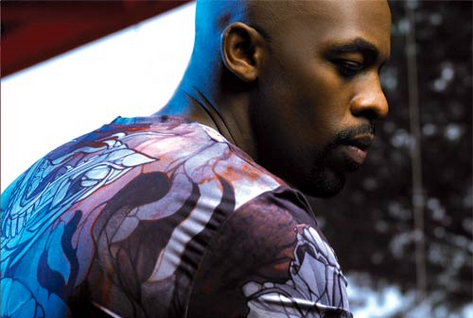 1. JOE THE DUMBER
This one is the worst because we actually love Joe. But this just goes to show you that no entertainer is immune from saying dumb sh*t, which means they also aren't above reproach. I won't dig into my peers that have only recently registered to vote (and subsequently voted) because most of us are only on our second presidential election. Joe, on the other hand, is 35. Also, the possibility of Barack Obama being (or not being) POTUS should've lit a fire under him. It didn't. And please don't think this is a case of us assuming he should've voted for Obama because he's a person of color. Joe could've very well been, in his heart, a McCain supporter. But he wasn't. Joe got very cocky on The Tom Joyner Morning show by asserting that his man (Barack) had it in the bag and didn't need his vote. Maybe Joe was just afraid to show up at the polls and have to endure a mob of randy soccer moms throwing panties on him. That scenario would've made more sense. In the end, a lot of readers of various blogs and listeners of the TJMS responded with "I'm sure Joe's album is going to sell so I don't need to buy it." Re-live this shameful, excruciating moment by pressing play. [H/T: TDV]