Chrisette Michele Has An ‘Epiphany’ & So Do We 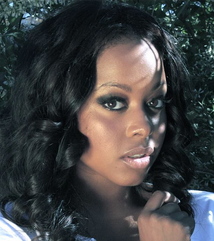 Chrisette Michele has steadily and surely been staking her claim as the talented songstress that she is in the R&B game. Able to bring style and class to any song she graces, she has helped to elevate Hip Hop tracks by notable artists such as Nas, Jay-Z, and The Roots by singing the hooks of these songs with an effortless ease. Chrisette's new track "Epiphany" demonstrates her ability to create a solemn, heart-wrenching track, but does it stand up to the exacting standards of your friendly SoulBounce editors, ill Mami and Ro? Peep the track below, then check our commentary.
Chrisette Michele: "Epiphany"

ill Mami: OK, so this is the new Chrisette Michele song. Sounds pretty good so far. I like the piano.

ro: I do, too. The intro is definitely strong.
ill Mami: The breathy voice is nice. The intro is nice, too, then something happens once she starts singing.
ro: Right.
ill Mami: It's getting worse.
ro: Also, I don't know if this is an "epiphany" as much as it is a slow realization. Sounds like dude has been steady wronging her.
ill Mami: Totally. My only analogy is like when you see someone with a nice hairdo and you realize it's a lace front wig. It seems real but then there's such a let down. Plus, I don't think sadness fits her. I like her sounding happier.
ro: I do, too.
ill Mami: In that sense she's the anti-Mary J. Blige. This refrain is annoying now: "I'm leaving." So go! LOL
ro: RIGHT. Just about over? Just about? How many times, girl?
ill Mami: OMG! this song needs to be "over" like she keeps on singing over and over again.
ro: Um. Girl, bye!
ill Mami: Okay. Let's reassess.
ro: LOL Yes, lets.
ill Mami: In one word, this song was lazy.
ro: In a word? boring
ill Mami: YES!
ro: Titling this song "Epiphany" was misleading.
ill Mami: YES! Again I mean if you're going to use a big SAT word at least make it worth your while. What epiphany was had? Just because you said it doesn't mean you really had one.
ro: It's like she had the epiphany months ago, and is now just getting around to acting on it. S l o w.
ill Mami: Yeah, like you had no epiphany at all. Basically I need for her to go back to the studio and redo this one. It could be better.
ro: Like you said earlier the sadness just doesn't suit her. For some reason it comes off so mildly. Blandly, even.
ill Mami: Exactly. And like I said, it's just lazy. It looks like we had an epiphany ourselves that we should not listen to this song ever again.
ro: For real. I think I'm just about over this song. Wait. OK. Now, I'm over it. I think.
ill Mami: Hahaha!