No One’s Gonna Save You From The Beast About To Strike: ‘Thriller’ Headed To Broadway 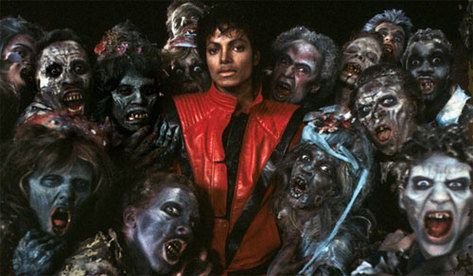 Arguably the most known, copied, and influential music video of all time, Michael Jackson's masterwork "Thriller," has found new life as a fully fledged musical. It was announced that the Nederlander Organization has acquired the rights to produce a musical based on the actual premise of the music video, and songs from Jackson's Off The Wall and Thriller albums. The Gloved One himself is reportedly going to have a major role in all creative decision making. "P.Y.T" and "Wanna Be Startin' Somethin'"sung by a chorus of brassy broaday voices! The werewolf transformation live! The red leather motorcycle jacket! Zombies! The famous choreography! There is so much potential for campy awesomeness it baffles the mind.

This could be the definitive musical of a generation. A marvel of
musical theatre. The most forseeable problems are how to expand the
girlfriend role to be more than just shrill screaming eye-candy and the
cast being magically whitewashed. Oh, and how they're going to actually
turn a short-film/music video and some of the best pop music ever
produced into a musical. What would you all like to see happen in "Thriller: The Musical?" I hope the theater managers won't frown upon entire sections of the audience spontaneously bursting into song or dance, because, you know, no mere mortal can resist the evil of...the thriller. [RS/LAT]


TAGS:  michael jackson
Previous: Mary Mary Get Animated For ‘Worship’ Next: Morning Soul: Wanna Lick You Up and Down