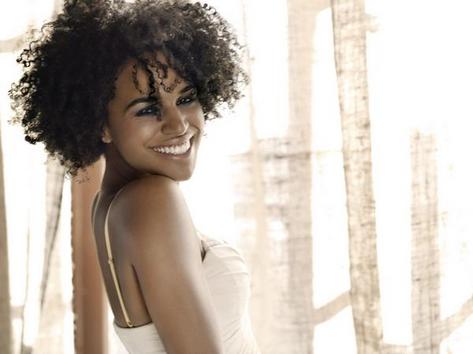 Ireland isn't exactly known as a hotbed of Soul music, but Laura Izibor plans to change that notion. The Dublin native is considered one of the genres most anticipated new artists. As a result of her being a singer/songwriter/piano player, she's been called the "Irish Alicia Keys," but she's far from a Keys copycat. Her voice actually reminds me of Goapele with a little Jaguar Wright sprinkled on top. When you hear the 21-year-old sing, you'll assume that she's been at this for her entire life, but she only got bitten by the music bug once she hit her teens. A naturally gifted musician, she secured a deal with Jive Records on her 17th birthday, but that deal turned sour and she's now signed to Atlantic Records who'll release her US debut, Let the Truth Be Told, on April 28th. In the meantime, you can find Laura's music on the soundtracks to The Nanny Diaries and Tyler Perry's Why Did I Get Married?, and her new video for "From My Heart To Yours" is currently in rotation on VH1 Soul and BETJ. Prior to her album release, Izibor will hit the road in March with John Legend for his European tour, but music fans in Washington, DC can check her out for free tonight at Bohemian Caverns. In the event you're not in Europe or DC and don't want to feel left out, press play below and after the bounce and see what all of the hype is about.

Laura Izibor: "From My Heart To Yours" (DJ Premier Remix)