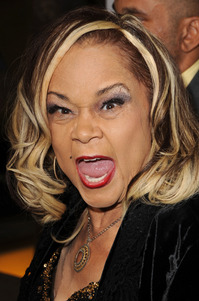 And now we come crashing back to reality. For anyone that had visions of 71-year-old "Miss Peaches" whaling on Sasha Fierce, put it out of your mind. It was all a joke! Now where will we direct our self-righteous indignation?

"I'm a comedian besides a singer," James said in a telephone interview from her home on Thursday morning. "I wasn't doing it to be hateful." James said her comments were meant to be taken as, "She's up here singing my song, now what am I gonna do?" Beyoncé's representatives had no comment on James' remarks. "I think I'm funny and she's not the only one I'll say something about," she said.

A self-admitted critic, the 71-year-old said in a December interview that she liked the film "Cadillac Records" and Beyoncé did a good job portraying her. However, James takes a lot of pride her signature song, and would have liked to have an opportunity to sing the song at the inaugural ball, where Beyoncé performed.

Thanks for clearing that up, Etta. No word yet on if all the nasty things Aretha said about Beyoncé last year were also "jokes."
James on Beyonce: Just a joke [PE via CL]

TAGS:  beyoncé, etta james
Previous: Whose ‘Showers’ Are More Refreshing? M.I.A.’s or Ghostface’s? Next: Morning Soul: Let Him Know This Love Is Real