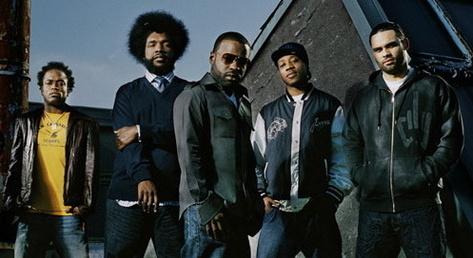 In light of recent developments involving The Roots' shiny new gig as Jimmy Fallon's Late Night house band, we thought it prudent to re-visit DJ Stylus's 6 points for why this won't be such a bad look (mostly the point that they are not taking a break from touring, depending on your definition of "touring"). Ultimately, this all looks like they will never be able to go to bed, and we still haven't learned whether or not Black Thought will be doing his rappity-rap thing every single night. Rap vocals might not make for organic "go to commercial" music but they may yet prove us wrong. The Roots are good with taking what they're given and turning it into fire. Check the points along with some maddening updates after the bounce!

[1] Brothers are gonna get an EASY paycheck. The music industry is still mad unstable, even for ground-breaking Grammy winners. These cats have earned the right to not have to bust their asses so hard to make a living.
If "easy" means writing a total of 200 new joints just to play on Jimmy's show then they might as well kick back, right? Heh. From Rolling Stone:

NBC will no longer pay for published music: That means, the only thing that the Roots can play are original songs. "We have to write 200 new songs, which will probably last about a year," [?uestlove] says. "We've written about 55 so far."

[2] Exposure: More of the music industry and the public at large will get to know who they are. As iconic as ?uestlove is, he still gets played to the left in the entertainment biz when people have no idea who he is. And we all know how criminally underrated Black Thought is in Hip-Hop. Not to mention the poor sales record of Roots albums.
If Jimmy isn't fired. People, for some reason, aren't feeling this dude.
[3] This is a band that has been living on tour buses and airplanes 200+ dates a year for 17 years. Why do you think Hub left the group? These dudes have kids and families. They'll finally be able to live a normal existence.

The Roots will commute to New York City from Philly to tape their Fallon segments: "Were commuting via tour bus every morning at 8 am," [?uestlove] says. "I have to do adult shit now, like go to bed before 11, which I've yet to do." --RS

We're unclear on the word-choice here: "segments"? At any rate, Philly-to-NY isn't that bad, but we imagine something like that can get a little taxing and tedious if done on a regular basis. But--

The Roots will not be retiring from the road!: "We didn't tell anybody we were retiring! I never want to pull some Eagles/Kiss shit where it's like, 'Okay, this is the last time you'll see us.' "They'll allow us ten weeks of touring time every year. We'll start with five shows each week night, but I'm certain that Jimmy will want to do it Letterman-style, taping two shows one night so we can get Fridays off. That's an extra 52 days so I'm sure we'll fill those up with shows."

[4] More time for writing, recording and doing outside projects. ?uestlove already has a huge rep among his musician peers and has done lots of amazing non-Roots related work. Maybe Tariq Trotter might get more opportunities like that. Captain Kirk, too.
They're probably tapped out from writing all those new NBC-safe songs (55 so far!) but ?uestlove is already heralding the newness that will become How I Got Over on Twitter.
[5] They'll get even tighter from playing together five nights a week. I predict good things from forthcoming Roots' albums.
It's all about "getting over" at this point. God bless those guys! Hopefully we'll get it within five years (see final quote).
[6] We'll still get to see them. They'll still do shows within quick striking distance of New York. The far-flung fans are the ones who will suffer.
Pretty much. According to Pitchfork:

The world's most renowned (and endless-solo-prone) hip-hop band are set to give Manhattan all the funk it can handle, with a residency at the swanky Highline Ballroom. "The Roots Present: The Jam" starts March 5 and continues throughout the spring. "Special guests" are promised. So far, shows are scheduled for March 5, March 19, March 31, April 14, April 21, May 5, May 13, May 18, May 26, June 2, June 10, June 16, and June 23. Also, on February 28, the Roots will perform at Power Shift '09, the "youth energy and climate summit" taking place in Washington, DC.

And if you're still jonzing for some ?uestlove action after that, check out the Roots drummer at his weekly DJ night dubbed "the fANtastic" starting March 26 at artsy downtown enclave (Le) Poisson Rouge. The residency takes place every Thursday until May 28.

The only downside I can think of is that Fallon ends up stinking up the spot and the show bombs.

The Roots are booked for five years: "I think if Jimmy turns on the charm like he did on Saturday Night Live, I'm almost certain that this show will work. Anything can happen. Knock on wood that this isn't the Chevy Chase Show or the Magic Hour. --RS

TAGS:  jimmy fallon", nbc, the roots
Previous: Is Jazmine Sullivan the New Jennifer Hudson? Next: Hot Like Ayah: Thinking About The Future, Remembering The Past