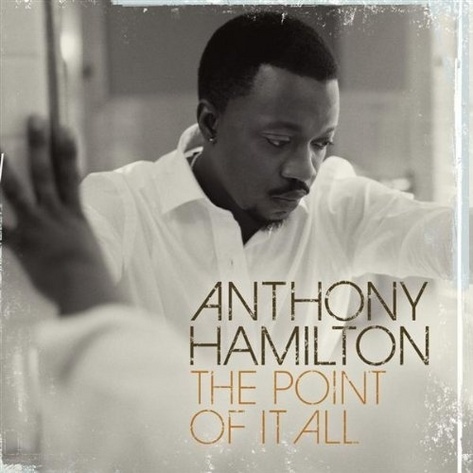 It is the belief of many that Anthony Hamilton can do no wrong vocally. His voice takes us back to a time when music was a little bit more real...more raw...more right. We feel him on a level that other male R&B artists are still aspiring to. However, it is the untrained ear that reduces Hamilton's sound to "throwback music." Many of his most notable recordings have plenty of thump, along with other production elements that create a wonderful blend of the old and new, all without bubbling under in the abyss that is neo-soul.

On his new album, The Point Of It All, we see and hear Anthony
Hamilton expanding the lane that he has created for himself.
Strikingly, the album begins with "The News," which offers plenty of
socio-political and spiritual commentary, along the lines of Curtis Mayfield and the best of the Philadelphia International oeuvre. Producer Mark Batson (Alicia Keys, Nas, Beyoncé)
worked on this tune and several others, providing much lift to tracks
throughout the album. While it is a well-executed and hard-hitting lead
track, it does not mesh well with the balance of the record.

Outside of the album opener, we discover that the rest of the song
cycle follows the arc of a relationship. Things are light and sweet on
"The Day We Met" and first single "Cool," which features David Banner in
rare form. Rightfully so, we then find the meat of the album in the
center, anchored by a pair of mid-tempo tracks: "Hard to Breathe" and
the agonizing and beat-heavy "Soul's On Fire." You are all but dared
not to feel Anthony as he spills his angst. We are quickly reminded
that Hamilton artfully draws from the dark places almost as well as
anyone in the game. Listening to the record, it seems that Hamilton
kept his writing hand strong between projects. On the ballads "Please
Stay" and the emotive "Her Heart," there is such a tender vulnerability
that never surrenders to saccharine. Anthony Hamilton gives us that
grit, but it goes down ever so easy.


The Point Of It All is an album that reminds you that being in
love, while never easy, is worth it. The songs here can help one endure
the tough times that relationships can bring, but also speak on the
restorative powers that love holds. Putting this album on might help
you get over it, through it, or back in it.

Anthony Hamilton The Point Of It All [Amazon][iTunes]