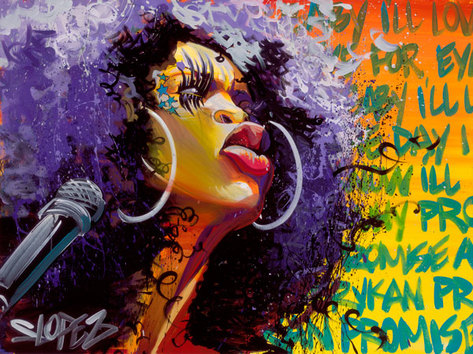 Los Angeles visual artist Steven Lopez's two passions, art and music, have been combined to create his "After Midnight" series. Featuring bright and bold portraits of icons such as Chaka Khan, Tina Turner, Aretha Franklin, Minnie Riperton and Sade, as well as artists of soon-to-be-iconic stature such as Jill Scott, India.Arie and Erykah Badu, Lopez's portraits are wholly influenced by the music of those he is painting. Observing the videos capturing his work while said artist's music is playing, one really gains a better appreciation of what a multimedia artistic vision is all about. The best part of the After Midnight series, besides the portraits themselves, are that a portion of all proceeds from the sale of 100 limited edition signed giclee

prints of the above portrait of Badu will benefit Erykah's Beautiful Love Incorporated Non Profit Development aka B.L.I.N.D., a charity organization that provides community-driven development to inner-city youth through the arts. For more information and to purchase these prints, make sure to visit After Midnight Soul's official web page here. Be sure to check what awaits you after the bounce for Steven Lopez's work in action on a certain funky drummer with amazing hair.