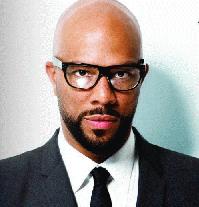 Common
, as we noted in an earlier post, is definitely a trailblazer when it comes to exuding a dapper and much more gentlemanly style than what typically personifies Hip Hop artists. Long before Jay-Z declared that men over 30 should invest in button-down shirts and lose the fitted caps, Common has been leading the way in understated fashion sense for quite some time. While sitting down recently with the Los Angeles Times, Common not only declared that bling is "gone," but that "good style is about having an eye for quality things and putting them together so they have a feel and integrity and flavor."

Despite noting his personal style icons are Miles Davis and Malcolm X, Common has designed (cue feigned surprise) a T-shirt line for Microsoft in addition to a previous stint in hat design for label Soji. Never one for overplayed aesthetics, he prefers unique pieces since those are "almost like having a woman in your life who hasn't been all over town." Score one for this fashion trendsetter, and another for fueling my since-high-school crush on this man. Sigh. [H/T:HHDX]