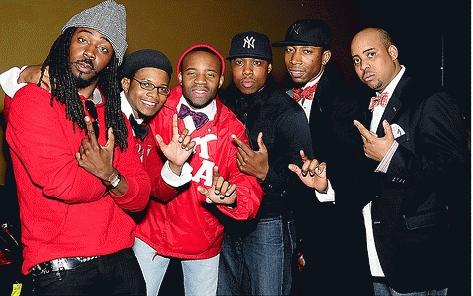 Jaspects
, an Atlanta-based sextuplet, has been defined in the past as a
Jazz band with futuristic overtones. On their newest release, The
Polkadotted Stripe
, it is obvious that they have seen both the birth of cool as well as the future of the funk in heavy doses. Known for their song "Let's Just Keep In Touch" from their 2006 release Broadcasting The Definition, this time around, Jaspects' sound seems to have evolved into something that is equal parts giddy, jazzy and "synthy." My two favorite tracks are below. The Janelle Monàe duet "2012" features her diaphanous, ethereal voice that seems otherworldly and is simultaneously a great first track for the album. It manages to touch upon their advocating an Obama presidency without sounding preachy. "Find My Way To Love" featuring Chantae Cann is one of the most beautiful tracks I've heard this year. There is a quiet timbre in her voice that displays talent without resorting to melismatic theatrics. Add to all this recommendations from both Phonte and Sy Smith, and it suffices to say that this album should be one that you'll want to cop for your own collection. [Photo: rhagans]