How NOT To Keep The Public Out of Your Business 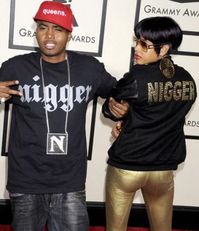 It was dismaying to learn that Nas and Kelis, two artists we have an affinity for, were getting a divorce, especially with Kelis in the latter part of her pregnancy. We understand her anger and frustration because of the circumstances, but we have to wonder if she's helping matters by going into extreme public detail about that which she is owed. We cannot, from where we sit, determine what is fair and what isn't fair, since we do not partake in that lifestyle or situation.

However, when she goes through great pains to point out that the lifestyle to which she's become accustomed not only includes "5 homes, fly[ing] first class, go[ing] to fancy restaurants" but her "nine-carat cushion-cut diamond solitaire" engagement ring, and her numerous name brand watches--"Cartier, Rolex, Frank Muller and Chopard", it becomes increasingly difficult to side with her. Granted, if these items were given to her then they are indeed her property, and she has every right to demand them as part of her settlement. But currying public favor, when the public is largely working class and can only afford to dream of Cartier in these tough economical times, may involve a slight shard of silence to the press. Especially when such public declarations have been known to taint, delay, and influence legal proceedings.