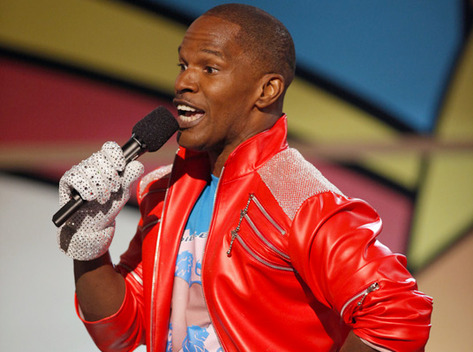 I know I am very hard on REGGINS (If you don't know what a Reggin is, spell if backwards), but there is a war going on outside between intelligent, educated, driven Black Americans. BET is a Reggin's greatest weapon in their war on intelligence.

The only reason that I watched this BET Crap is because of the tribute to Michael, which is all Buffoon Entertainment Television has been bragging on since Michael went into a coma! So needless to say BET struck a mighty blow for COONERY! So in order to try and fire back, I proudly present the Top 10 Reasons the BET Awards Made Me Want To Vomit:

10. The muth@$#% sound man: How in the world do you leave a night dedicated to (arguably) the greatest musician of the past 40 years up to someone who obviously took a correspondence course and got a D- in turning up microphone volume. Some of these performances sounded incredible to my imagination because I had to strain to hear them.

9. T-Pain: I don't even know where to begin. This reincarnation of Stepin Fetchit not only embarassed all of us by that waste of precious metal he calls his "BIG ASS CHAIN". Yes I know it's his money, but there's a time and a place for everything, and (I know it was BET) this wasn't it. He had a great-looking Michael shirt on that no one could see because it was eclipsed by his coon medallion. Then, to add insult to injury, when accepting an award, this buffoon decided to drink out of a plastic red cup. REALLY?!? How classless.

8. Zoe Saldana: Why in the world would you go out to present an award with the legendary Nichelle Nichols (The Original "Uhura") from Star Trek and embarrass the very legend who paved for you by telling the WORLD that Nichelle is in the restroom? That was so classless and unladylike. Yes Zoe, you can STILL GET IT, but you need some etiquette lessons.

6. Tiny and Toya: This is why I stopped watching Bamboozled Entertainment Television in the first place. All you have to do to be a success is let a a rapper get you pregnant and you get a reality show? Way to go BET! This is going to set us back 350 years.

5. Frankie and Neffie: See Number 6, except for the fact that instead of having a baby by a rapper, One is the crack addicted mother of a lackluster (although good-looking-in-a-hoodrat-sort-of-way) R&B singer and the other is a sister who is the Black version of Khloe Kardashian - sort of looks like the chick you wanna bang but she got the shallow end of the gene pool! Horrible!

4.The Censors: These idiots couldn't bleep their way out of a wet paper bag! I counted 2 sh*ts and they beeped out h*? SMDH.

3. Debra Lee: The New head of BET is such a pioneer! No one thought that BET could sink any lower than Bob Johnson's level of coonery and you proved us all wrong! Moron! I bet you think you've done something substantial, but you have only managed to embarrass us on an international stage due to the fact that CNN has been covering this abomination!

2.The Pay It Off Show: Another attempt to bamboozle Black people. Whatever you do in BET programming, don't encourage or empower black folks to get out of debt, just have a game show and give false hope to millions! Way to go!

1. Tiny again: You tarnished T.I.'s Viewers Choice Award by accepting it in his honor with ur broken english and off the rack House Of Dereon dress. Again I encourage you to see reason #6.

The Baby boy skit: It was funny for the first two minutes! Was Ving Rhames really drunk? Sad.

Drake's performance of "Every Girl In The World": This was okay until they brought those little girls onstage! How Canadian and pedophile-like of you. We tolerated that nonsense with R. Kelly and he's a musical genius. You're a flash-in-the-pan for now. While you're at it, I know these coons don't expect much of a performance but you could have at least gotten out of your seat. Especially since you've been playing a kid in a wheelchair for years.

Joe Jackson during the pre-show, you were an opportunist, plugging a new record label and YOUR CHILD'S BODY ISN'T IN THE GROUND YET! You, sir, disgust me more than the collective casts of all 800 seasons of College Hill. You should be ashamed!