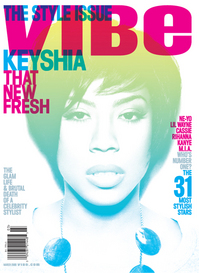 Jonah Weiner's Slate article about the death of music mags has a lot of us talking, and it is any wonder? These publications are dying left and right for a number of reasons. But there was one particular portion of the article that stood out to us (no, not the disappointing experience on the set of a Beyoncé photoshoot):

Hmm. We're not sure we'd even want to be music journalists, not with popular music being so garbagey right now.

It's great writing on SB, since it's independently owned and operated and no one's forcing this topic or that topic on us. We pretty much have carte blanche around here, and that's what you see--unfiltered. We couldn't imagine working for a popular Hip-Hop or "urban" music publication, and having a boss that instructs us to review six albums in a month and we're forced by the very nature of this product to write bad reviews, which would result in some angry rapper making threatening phonecalls to the office because we didn't give him five afro-piks or whatever. That doesn't sound appealing at all.

Why would anyone want to be a music journalist right now? How can one write at length about lyrics when lyrics are so banal and incomprehensible that they're practically nonexistent? Or when everyone's using the same producer? Or the same guest rappers? You get the idea.

Would a benefit be getting to hang out with the stars? The article states "the days when Cameron Crowe could spend months reporting a story from Led Zeppelin's tour bus are long gone." Who's worth hanging out with now? Chris Brown? Not even if you wore a helmet.

It can be argued that a dope writer can write about anything, that he/she can spin shit into sugar. The question, though, is: Should he/she have to? A lot of the publications that recently fell on hard times had to come up with innovative ways every month to write about piss-poor music and the often greedy, entitled or completely dense people that perform it. Popular music isn't designed with the intent of inspiring layered, sophisticated commentary--it's designed to sell. There's a certain beauty that exists in the parsing, exploration or criticism of popular art, but how effective that commentary is largely depends on the subject. We imagine it's rather difficult to find varied, exciting angles in an artform that's ruled by homogenization.

So yes, we definitely feel a sense of sadness on behalf of our print media counterparts, but we felt this even before it was a matter of job security. For seasoned music writers, the very thing they love has been steadily trending towards crap for some time now, and all they could do was smile and do their jobs.

Spinning in the Grave: The three biggest reasons music magazines are dying. [Slate]