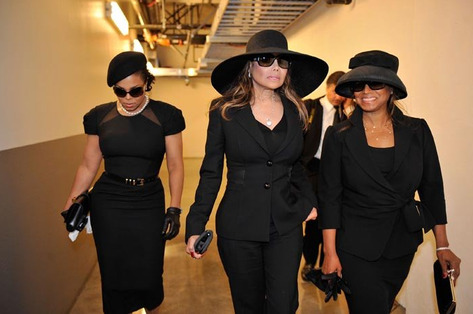 Janet Jackson, pictured here with her sisters La Toya and Rebbie on the day of brother Michael's funeral (credit) appears to have a lot to sort out in 2009. On the heels of her brother's death, reports are surfacing that she's offered to raise Michael's children. On top of that, comes the rumors that Janet and Jermaine Dupri have split up. Oh, and she's back to work on the Why Did I Get Married sequel. Aaaand, she's slated to perform at a Michael Jackson tribute concert on 8/29 (MJ's birthday) along with--wait for it--Justin Timberlake. How does she juggle all these personal and professional developments? Time will tell, but we're pretty certain her approach to her career and creative output will be forever impacted.