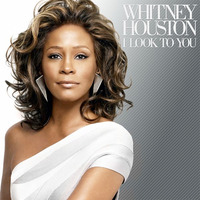 Practically a year ago, a Whitney Houston track leaked called "Like I Never Left," featuring the insufferable Akon, who was possibly included to distract from the fact that Houston doesn't sound as great as in the past. Too bad that didn't work; that song is poo. In fact, I think I said something along the lines of "If this ends up on her new album I'll be first in line to buy something else." And look! According to the tracklisting the song is indeed a part of I Look To You. I can't say I'm too mad since the prospect of a Houston return never involved any love of the music so much as my overall fascination with her, so I'm basically here to impart the chilling details at this point. At any rate, the release will also include work with Swizz Beatz, Johnta Austin and R. Kelly. I can't wait to not hear this album. Tracklist after the bounce. [PBB]