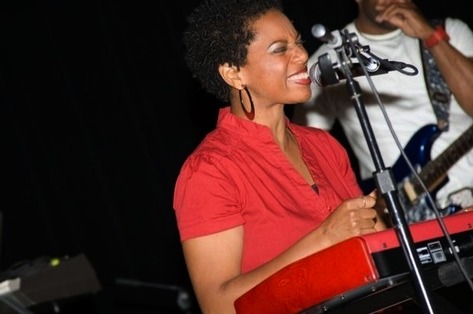 There's nothing I hate worse than being tardy for the party, so I'll take this late pass and keep it moving because there's no way that I could not post this newish track from Angela Johnson from her upcoming album, It's Personal, set to be released at the top of next year. Angie is bringing the heat, the noise and the funk on "Better," which is an uptempo love song that will have you dancing whether you like it or not. I actually saw her perform this earlier in the year when I caught Angela as part of the Jazzy Soul Collective, and I immediately fell in love
the song. You can view my video of that performance after the bounce to witness for yourself that Angela is the deal both live and on wax. Her last release, A Woman's Touch, was one of my favorite albums of '08, so I really can't wait to hear what she's cooked up since then. The best part of all, Johnson is giving away this audible gem for free on her website via Reverb Nation, so get it while the getting is good. And, trust me, this is joint is really good. Press play for proof.