Bilal Shows Up And Takes Us ‘Home’ 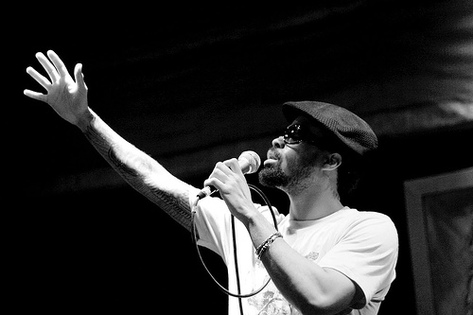 Ask five different people where Bilal has been, and you're likely to get five different answers. Truth is, the enigmatic soulster has been more hard to pin down lately than a wayward balloon on a windy day. Yet, there he was on Monday night, performing alongside Jennifer Hudson, Jullianne Hough and Questlove as part of the The Wizard of Oz's 70th anniversary celebration in Central Park. The free event, which was sponsored by Netflix and featured reinterpretations of tunes from both the original production and The Wiz, allowed the artists creative license with their versions. Bilal surprisingly kept it close to the vest, choosing to tackle the Diana Ross/Stephanie Mills showstopper, "Home." I love his recording, which was captured during one of the show's rehearsal sessions, and hope that 2010 will finally bring us his next project. We shall see, but for now, repeat after us: there's no place like "Home." Enjoy. [Photo credit: Artvibe] [H/T: OKP]